Showing posts from April, 2017
Show all

A little bird did it. 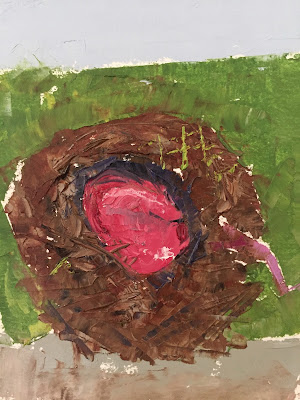 Have you ever seen a bird's nest up close and personal? I have two of them - one that Vicki found in her driveway and one that robins built on my porch last year. (They built a new one there this year) I don't know what kind of bird built the one we found but it has treasures in it - green mesh, shiny ribbon, purple ribbon. The robin's nest is neater but just grass and twigs. The robin that nested outside our window a few years ago used a tuft of our dog's hair. It was Jackson's hair- blonde and unmistakeable. I decided that for my fifth 20 minute painting I would try one of the marble eggs in one of the bird's nests. Of course being the size of a hen's egg, and a large one at that, it filled the whole nest which probably would have held three or four bird's eggs. I think that I might either work more on this one or paint it again. As for reading, I am taking a break from Margaret Atwood in favor of Mary Kay Andrews who is much lighter and funny.s.
1 comment
Read more

One of these things... 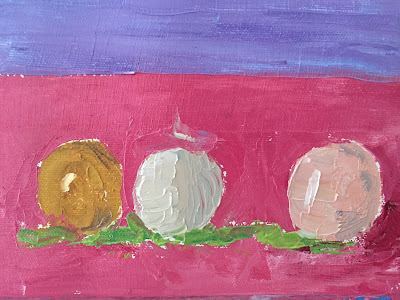 is a real egg! I was running out of things to do with the marble ones. So.. One of these things is not like the other tell me can you say which one? Can you still sing the tunes from Sesame Street or is it those extra years I had with some of the foster kids? I think that I will try some 20 minute landscapes this week. Since I have painted this whole street I am going to have to get in the car and go scout some places. Adventures in painting here I come! All will be well, XOXOXO Caroline
Post a Comment
Read more 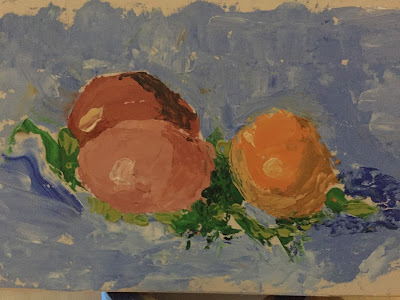 Painting five versions of the same thing, each painting no more than 20 minutes in the making might sound boring to you but it is actually an interesting challenge. For one thing, how many ways can you set up marble eggs? I am already about to run out of ways. Having only 20 minutes means that you have to go for the essence of the thing also and leave out some of the refinements you might normally include. It becomes quite a challenge. Here is today's effort. One good thing is that you can make lots of paintings this way and the more painting you do the better you get. Or so they say. I have begun walking again. It has been hard to get back into it after I was ill for several weeks but I feel better when I walk although right now I am still building back up. It took three different outings today to get less that three miles. I like to walk at night but I am going to try to go out early in the morning. Early for me that is - about 8:30 or 9:00. We will see how that works. Not too
Post a Comment
Read more 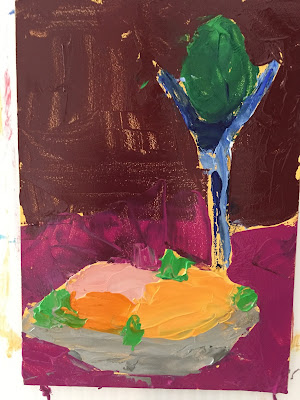 Mary (my teacher) has thrown out a 5-day 20 minute painting challenge.Today I did one with marble easter eggs. My 20 minutes included laying out my paints so after I finished and photographed it I went back for a few minutes and did some more on it. When I began this phase of painting I had no idea how much of a challenge it could be and how much I would be putting in to it. Only about 600more paintings and I should be much better! I read Oryx and Crake by Margaret Atwood. As I have said before she is a good writer; she is also imaginative and a little scary. This book is about what happened when the science of cloning and gene splicing became too big. Very short chapters but that does not mean that it is easy to put down. I read right through it. Now I am on another Linda Fairstein- this one set in a hospital. Ms. Fairstein's books build a story about the characters but it is not one that has to be followed from the first book. That said, it is always easier if you begin at t
Post a Comment
Read more 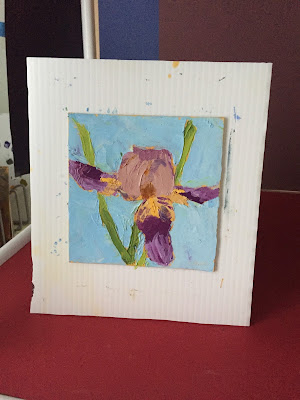 On the FB painting group of which I am a member we were challenged to produce a 20 minute painting. No fussing around just sketch mix paint and put it on the support. I did a 6x6 oil on a prepared board of an iris from our yard. Twenty minutes and done - no going back and fixing things. The purpose of the exercise was to loosen up and not get all finicky. As you can see I wasn't't finicky about the photo either! Speaking of irises I saw two beautiful yellow ones at the nursery today along with what looked like it might be darker yellow iris and a lemon yellow peony. Now I have always gone for light pink peonies but this one is stunning and might have to become a part of the garden I am planting. A garden that might be yellow and green with a little purple. Hmmmm. I need to get going on it. All will be well XOXOXO, Caroline
Post a Comment
Read more 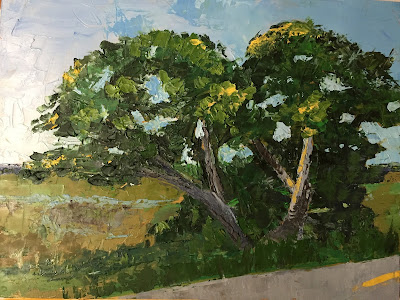 I have been reading about painting for the last few days after a FB group I am a part of posted their favorite books on painting. I am learning a lot about color and edges and composition and lots of technical stuff. Now I just need to try to add it to what I have already learned and unfortunately that is not as easy as it might sound. Here is the last painting. This is a tree on the causeway from Brunswick. GA to Jekyll Island.I would love to go back down there. The Jekyll Island Club has such an air of history about it and I think that there would be many interesting places to paint. I might mention that to someone as a trip we should take - one of many. I can also recommend Margaret Atwood's Bodily Harm. I have a habit of finding an author I like and reading all that she/he has written and then having to search for another author. Thank goodness Atwood has been prolific! Meanwhile Happy Easter to you. All will be well, XOXOXO, Caroline
Post a Comment
Read more 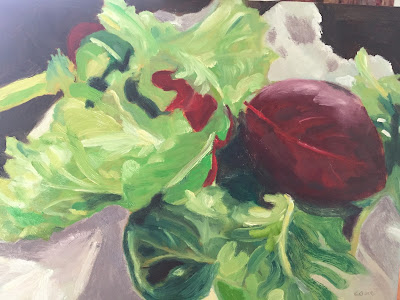 As is often the case I posted the lettuce, sat down, took a deep breath, looked at the painting and jumped up to fix it. Why I can't see the fixing that needs to be done before the posting I will never know. So here it is - the second iteration. Handful of lettuce on a white linen cloth in a table by the window in the sun. I have the next one in mind so stay tuned! All will be well XOXOXO Caroline
Post a Comment
Read more 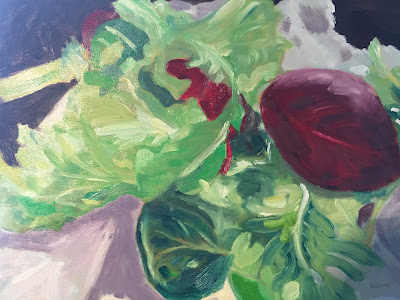 I don't know what it was with Blogger yesterday but I was told that the photo didn't publish, then, after I went to it and published again it seems that the photo had appeared. I have no idea what you got but I did my best from this end. I am thinking about a new platform with a website for a gallery and a blog but I might need some help establishing that and right now there does not seem to be time. So here is the latest effort. Lettuce was difficult to paint for me and Dean is not sure about the red leaf but... Okay no photo just a bunch of HTML and machine language. We will see if that becomes a photo. Meanwhile I have read Hag- seed by Margaret Atwood. A retelling of the Tempest and rather unusual. Atwood has won prizes for her fiction and her The Handmaid's Tale is being made into a movie (I think for TV).If you haven't read any of her books give them a try. All will be well(maybe even with this post!) XOXOXO Caroline
1 comment
Read more 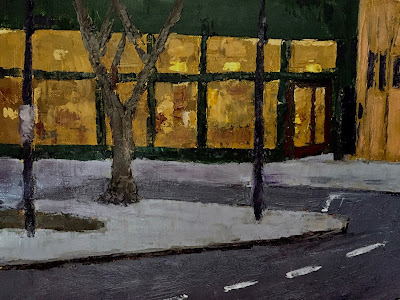 I was walking a few days ago and just on a whim took a photo of the Bank of Cleveland. It turned out to be mostly street and sidewalk but it has a small city feel to it I think. I reserve the option to change the color of both street and sidewalk if I can find a better mix. In the photo the sidewalk was almost silver white. Dean says that it looks like it is piled with snow. After that warm day yesterday a front came through; it is not cool but COLD today and tonight and for a few more days possibly. That was a very short summer. It was just long enough for me to put the heavy jackets away. I doubt that I am the only one. Fortunately I am not so thorough that all warm things were stored! Dean talked to our builder today and I hope that things are going to start moving again on the garage. I have had enough of the mess and we have other things to do. We need to do some work on a house in Atlanta that we have an interest in and get it on the market. The Historic Neighborhoo
1 comment
Read more
More posts