Showing posts from January, 2013
Show all

Does it ever seem... 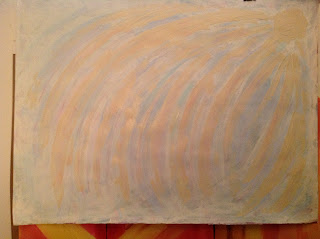 Does it ever seem like you are doing and doing but at the end of the week there is not much to show for it? Perhaps that is because some of what I have been doing is studying and I am sure that you don't want me to write a long treatise on the Roman Empire and the early Christian Church! It is very interesting, and we also have what we call Theological Reflections or discussions.This weekend we are getting together on Sunday afternoon to share our life stories. It is easier to be open and transparent when you know a little more than the basics about your classmates. (Or you are blogging and have no idea who is reading for the most part). Meanwhile, a piece of paper that started out painted with dark splotches of magenta, blue and purple became this Then this Then this Then this ( Lots of glare here)  and finally this.  I just can't do pale. Just can't. The rooms in my house are pastel but I can't make pastel paintings or quilts. Go fig
Post a Comment
Read more 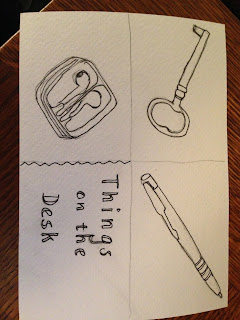 Today the sun was not obscured by clouds. Today there was no rain in this county. Today was a lovely day. We have had rain every day for the last week and a half for a total of 8.7". Yesterday we finished it all up with big wet snowflakes. Today was sunny and cool. It was wonderful!! While it was so rainy, I was forced to work in the house. Here, sideways for some reason, is a little drawing I did and below is a  little painting. I have been working on abstracts for a while and it was fun to try the lemons, not to mention how much the cheery color helped. These are done on 5"x7" pieces of watercolor paper in pencil, then gone over with a waterproof black pen and then colored or not as the mood strikes.   If you are interested in learning to do this, click here  to go to Jane LaFazio's blog and check out her classes. She is a super teacher and you can post your work to the class Flickr and she will give you help. She is a generous and gentle teacher. I wou
Post a Comment
Read more 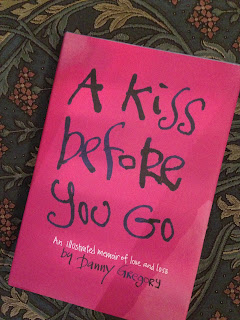 We took a quick trip to Tullahoma to go to one of the grandchildren's swim meets and help Jenny with some deep cleaning. The children, who had been sick, did not have their best day but we enjoyed seeing them compete. Drew competes with 9-10 year olds and at 10 is about the height of the other boys although he is heavy. Sarie, on the other hand competes in 8 and under, and at five, is much smaller than the other girls. When they line up she comes to the shoulders of most of the others. We will see them again next week at a meet closer to home and I hope that they will be back to their top form. When I arrived home I found that two packages had been delivered. Wheeee! I now have two new books and some yarn for an afghan/blanket. One of the books is this one by Danny Gregory which is an illustrated memoir of the grief he dealt with after the death of his wife, Patti. I have begun reading it already. Gregory is very honest and open about his grief, its effects on his life a
Post a Comment
Read more

Up the stairs and down again. 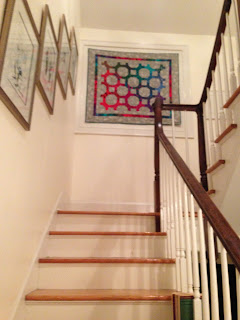 This old house has ceilings that are about nine and one-half feet high. That means that there are 17 steps from one floor to the next. Today I decided that I had to take all the Christmas decorations up to the attic after making one last sweep through the house for forgotten little doodads. I carried up 11 loads. I had no idea that we had so many decorations. Actually, some of the boxes were quite light as they were fitted out for tree ornaments, most of which are feather-light. Still, by the time I finished, my knees were complaining. Oh, yes, the quilt on the wall is one I made years ago and the only one of mine to have been published in a quilting book. It is covering the place where we cut an opening for the whole house fan.  Here is a closeup. Well, it is kinda close up. I was standing on the steps. I used the fabrics on hand and tried to link each to the other by color. It was fun to do. See how nice the storage room looks? The rocking chair is one that my grandmother
Post a Comment
Read more 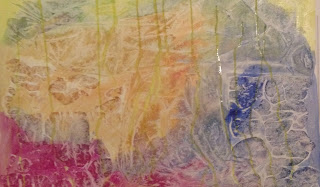 I told you that my word for the year is "deepen". Starting Monday evening my third year of Education for Ministry will be beginning and I will deepen my understanding of church history. I am sure that it will be both interesting and at times just a little boring, as history usually is, but I am excited about beginning. The professional student part of me and the spiritual part are in concert here. I am also working on deepening my art, but first I had to finish a few pieces that I had begun earlier. So here they are. The pour on the left has become the painting below.  Dean said that it reminds him of Viet Nam. It certainly has a little hut and some jungle-type plants.    I like the sense of light in this one. It is obviously a clearing and not a new place. The wall has fallen in and the jungle is beginning to take over. I suppose that it could benefit from some more plants, but I am not sure that I want to be that literal. So many decisions and not enough experien
Post a Comment
Read more

A little of this, a lot of that 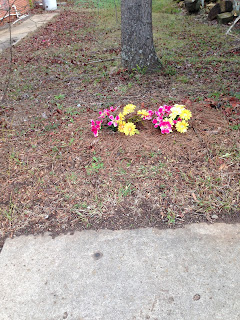 Here is what there is a little of - pictures of the small South Carolina town that Sara and Greg live near. The largest building is an auction house but I didn't photograph it. There is also a lovely old house which might be a B&B or Inn, or might not. It is beautiful and tasteful and the decorations were just right. It was cold when we went to town, though, and I didn't get all the pictures I wanted. I hope that this little mound is the grave of a pet and not a memorial to someone who was hit by a car while crossing the street. There was no marker, just the flowers beside the sidewalk on a lot between two buildings.  Below are police stations, old and new. The new one is not much larger than the old but it probably has internet, etc. as well as electricity and phone lines.  Below is a handsome building that was once the town hall. On the side  face there are windows trimmed in a burnt orange color. Very nice with the bricks. The building has been a res
Post a Comment
Read more
More posts