February 23, 2017
When Dean and I moved to Cleveland, we bought a new mattress. It was a good one, made with the new technology of the time "memory foam". After a while, we realized that what the mattress remembered was the places we slept and each year the impressions of our bodies recovered more and more slowly and were deeper and deeper. Comments by our children made us realize that we were sleeping in what amounted to hammocks. Pillow top mattresses can't be flipped, of course, so of to the mattress store we went. Our new mattress is rather old school. It has no memory and no pillow top but it can be flipped and turned. Old-fashioned sleeping -- all through the night.

All this made me think about beds through the years. If you look at wills from the 1800s, "beds" were often passed along in wills. Strange, I thought, but then I realized that what was passing was what we would call the mattress. They called the wooden part the bedstead, and the mattress part the bed. What made beds so precious that they were passed down? Well, for one thing, men owned everything and whoever was the executor off their estate could sell the bed right from under the widow. But I think that the main reason was in the bed itself.

A bag had to be woven for a mattress/bed. It had to be sturdy, with heavy threads that would hold up through seasons and years. Some beds were filled with straw. My guess is that they had to be fairly firmly filled and that the straw had to be replaced yearly. Have you ever spread straw in your yard? Scratchy, to say the least. Stuffing a mattress would have been a real job.

Of course the luxury beds were feather beds. How long do you think that it took to gather enough feathers from a family's chickens, geese or ducks to stuff a whole bed? Just to stuff a pillow would have taken quite a while. Maybe the best idea would be a straw bed on the ropes that ran across the bed and a featherbed on top of that. I don't really know, so if you do, please share! The whole thing makes me appreciate who we went, bought, awaited delivery, put on the sheets and now have a firm, comfy mattress for a good night's sleep
1
On to art. Here is another broccoli study; this one is in low light. 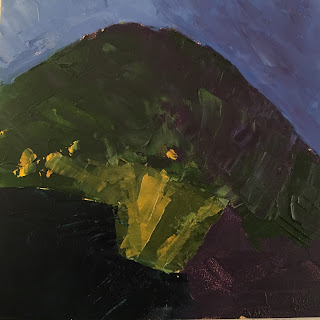 Here is the night time painting that followed. 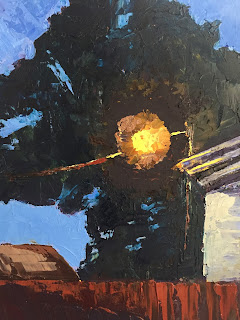 Painting the light in front of the tree was quite a challenge for me. I am going out at night and looking for a scene to photograph to do another one.