Last Friday I reported to the courthouse to find out about my impending jury service - four months but only about 12 days and I will probably only have to actually go in on one or two days. Interesting. Since it is summer term and they realize that people have vacation plans, I can call next week and tell them about the days we plan to be gone and I will not be called on those days. I can live with it.

As to another jury, I sent four things to be juried for the MMIA shows. All our paintings have to pass jury, a jury of our peers, who examine the painting and tell us where it lacks (or doesn't) then we rework  (or not) and submit it again and if it passes we can enter it in our next show.

My style varies considerably but this time I submitted four pieces. Two were passed and two were not.  One that did not pass is the banner on this blog. The lines were not straight and there were a few other things. I am in the process of making changes. Lots of measuring and taping to get straight lines! 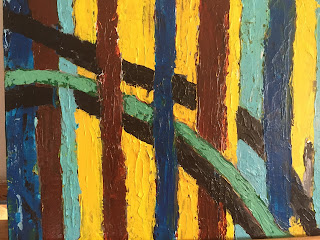 Here is the other one when first finished. 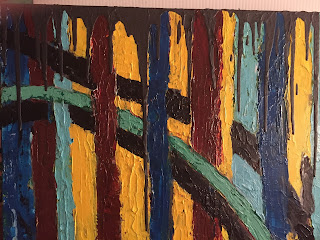 I added the micaceous iron oxide drips before it went to jury. 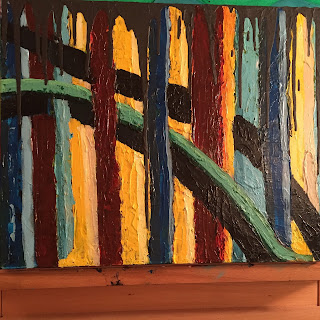 The jury said that it needed more work (they are good) so I made some changes. Now I have to decide whether to take it back to jury or not. Decisions. decisions.

Meanwhile I have bought some new canvases and have new paintings dancing through my head.

Dean has been busy replacing our leaking toilet and we have been moving everything out of the garage in preparation for building a new one. More on that later.

All will be well
XOXOXO
Caroline

Janice said…
I enjoy reading your blog. You are talented in so many ways. I would enjoy seeing images of the paintings that the jury passed and their titles.
April 9, 2016 at 11:00 PM

Notes from the Bijou said…
You should have posted your painting that the jury really, really liked.
April 9, 2016 at 11:09 PM