May 11, 2015
Well, after the technician removed the big hairball from my computer's fan, things are working a little better, although we now have nothing left of Jackson but his ashes. A new printer to replace the one that won't feed paper is on the way. We went to our Granddaughter's dance recital - cute and funny- and will be going next to our grandson's band concert. I cut the grass and did not faint. Busy with lots of things but I have done a little to the BIG canvas. 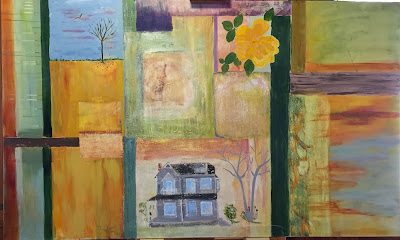 I had started the second time with photos of ancestors and was even adding a house that they lived in in 1906 but decided that those were subjects for another painting so I ripped them off. Well, I ripped off some and the last one I sanded and scraped and rubbed with alcohol (it does at least somewhat remove acrylic paint) until only a shadow remains. I think this might be the final plan, although it still requires quite a bit of work and finishing and that house must be demolished or painted over or whatever it takes to get gone. The finished piece will be a abstract piece of sorts. Can't tell you more because that is all I know. 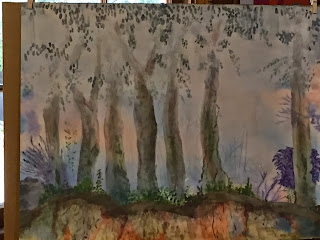 This is the Creekbank painting, ready for first critique. I also need to start on something about the rural south and I think I have found it. 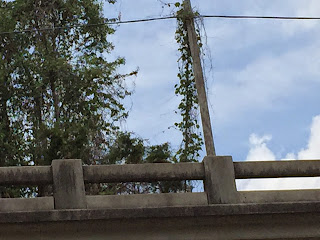 This needs to be cropped and finagled a little but I think it will make an interesting painting. I have also asked Mary Ann Moss if I can use one of her close-up photographs of flowers and she has said I may. See the flowers by going to Dispatchfromla.typepad.com. I haven't decided which one(s) to use so you can let me know what you think.

I am also starting to check out Blogsy which will let me blog from my iPad; that should be really interesting. Meanwhile,