A Funny Shaped Apple and other things

June 05, 2014
Well, the paintings are at the gallery, being hung in preparation for the opening of the exhibit on June 12. We won't be here for the big opening but Vicki and our friend Lorraine have promised me that they will watch people intently and see what the reaction is. My hope is that one (or could I hope More?) of the paintings will sell, of course, but if they don't, at least this is a beginning. 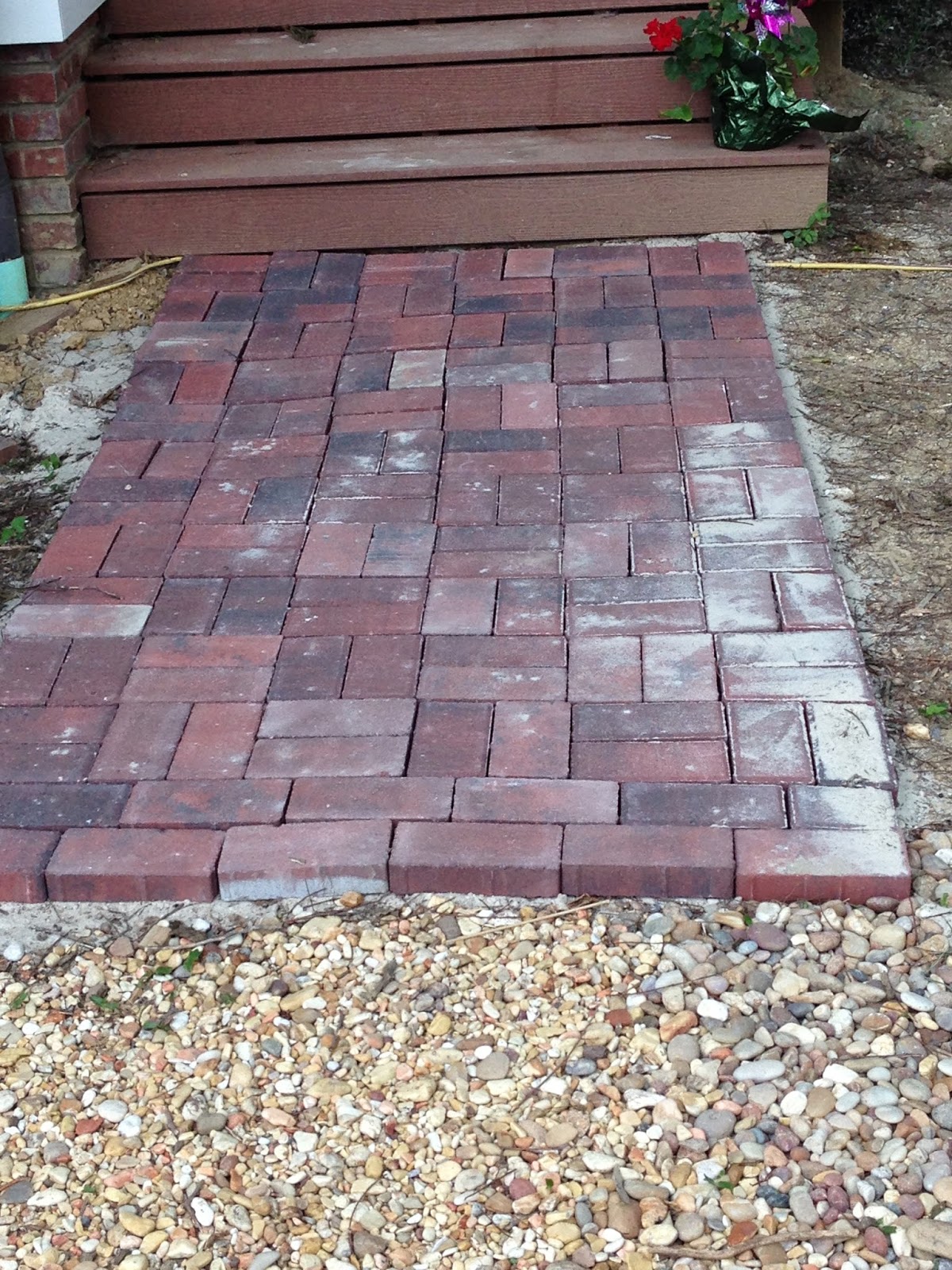 Besides being a painter, I am a brick layer. These are left from the front yard (plus 38 that we had to go buy. )Vicki and Lorraine helped me to carry them to the back yard (we loaded the car, actually - Vicki's good thinking) and I began putting them in place. Sarie helped me with the last ones. She put two down then two others down that I had to ask her to change. She looked at them again and said, "Oh, it's a pattern." and she helped me finish. I plan to plant Ophiopogon (Mondo Grass) along the edges to soften them and keep things in place. 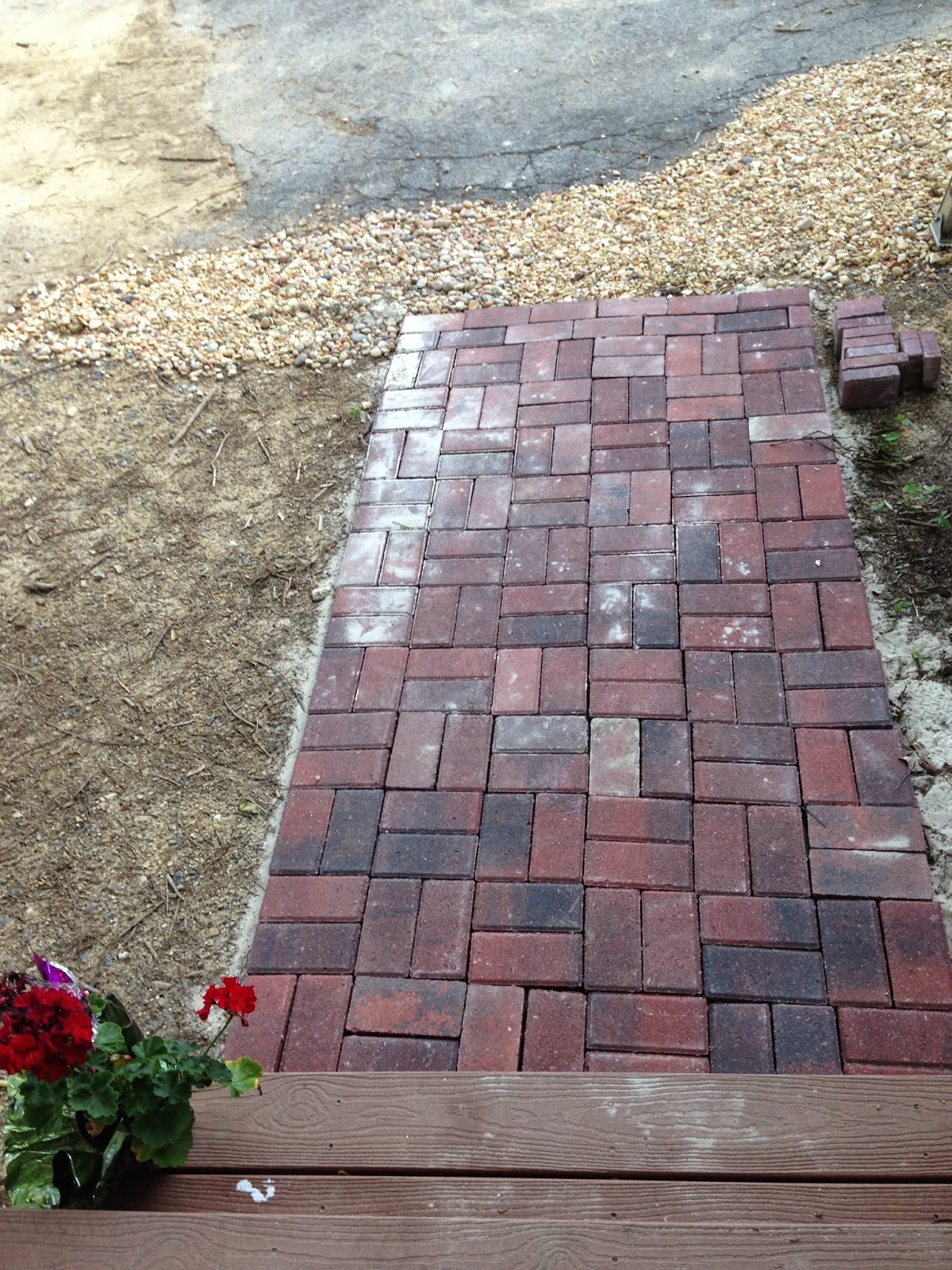 Just couldn't resist a view from the other end. I like the river of gravel at the end. 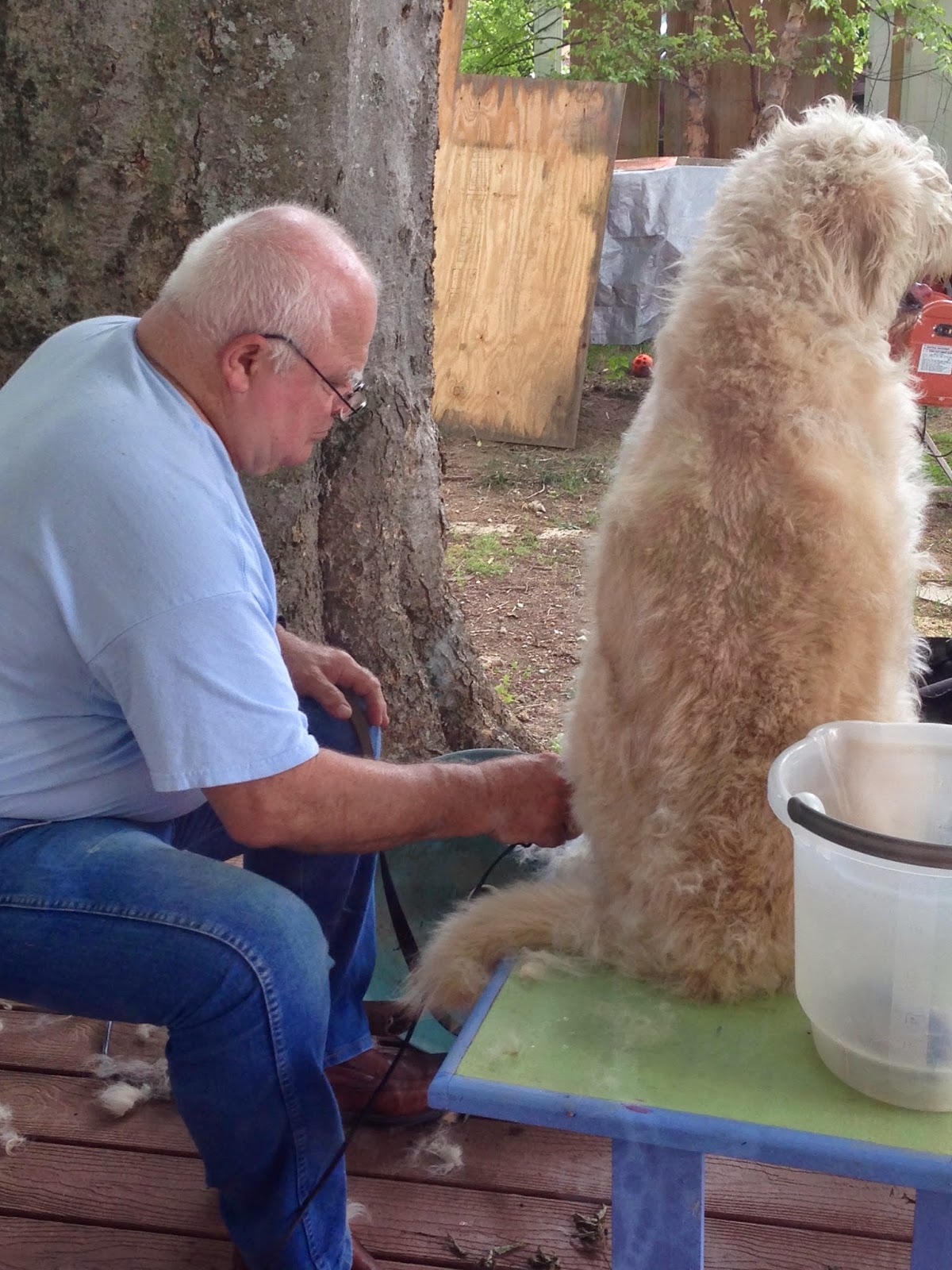 This table, today a grooming table as DH clipped the dog's long hair, was bought in Cashiers and was red at the time. A change of our furniture arrangement and it went to Jenny for Sarie to use when she was learning to write and color, etc. Sarie has outgrown it and she and Drew are now using the table that Jenny and her dad built which I had been using as a folding table. Alex says that he knew he would have to move furniture but he didn't know it would be from state to state and city to city. Ha! I am going to paint the table again but probably not red and use it as a coffee table in my living room. 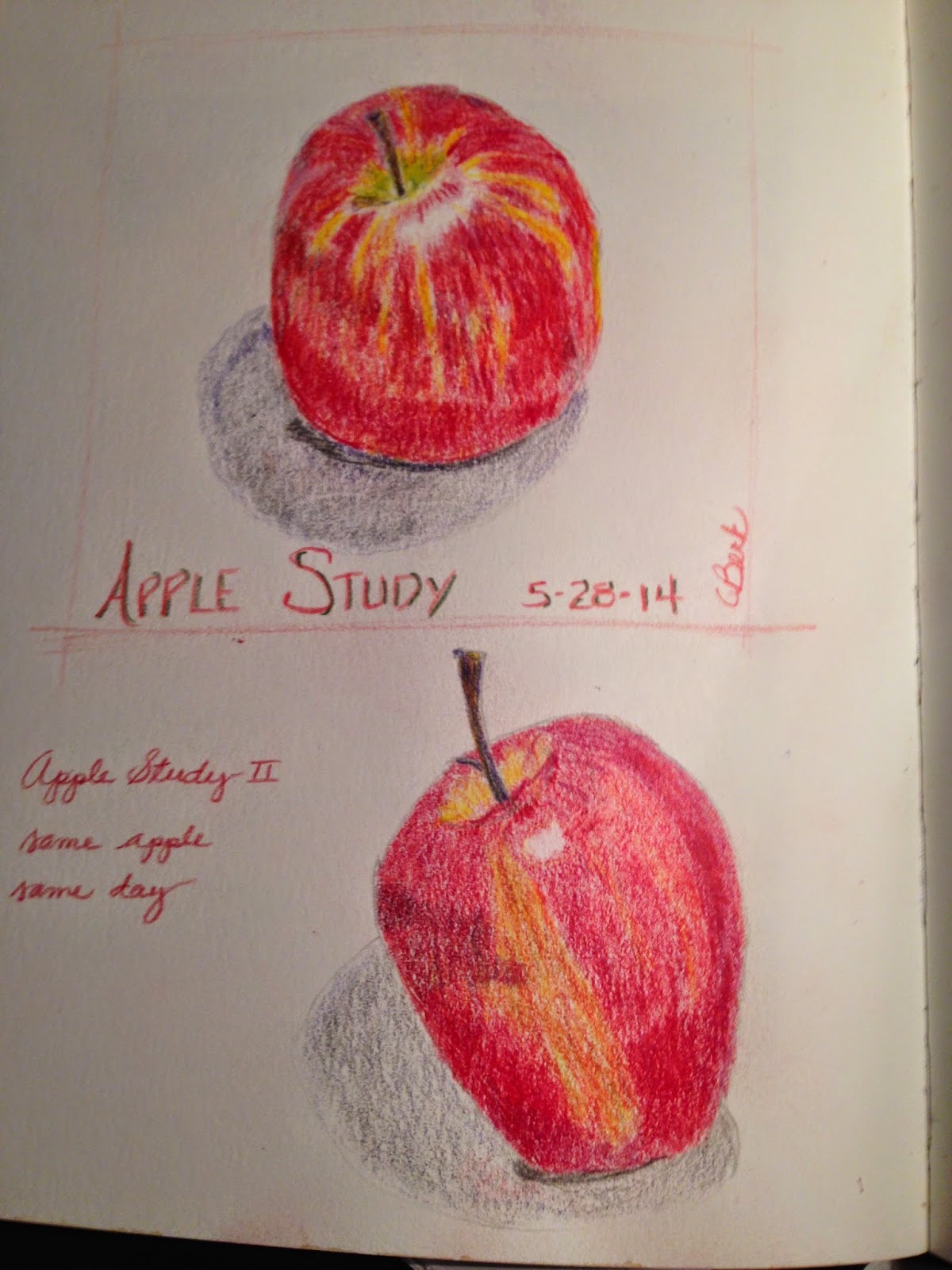 Two views of a funny shaped apple. This was much more difficult than I thought it would be; the view at the top was especially hard because it didn't look like an apple from that direction. These are colored pencil. 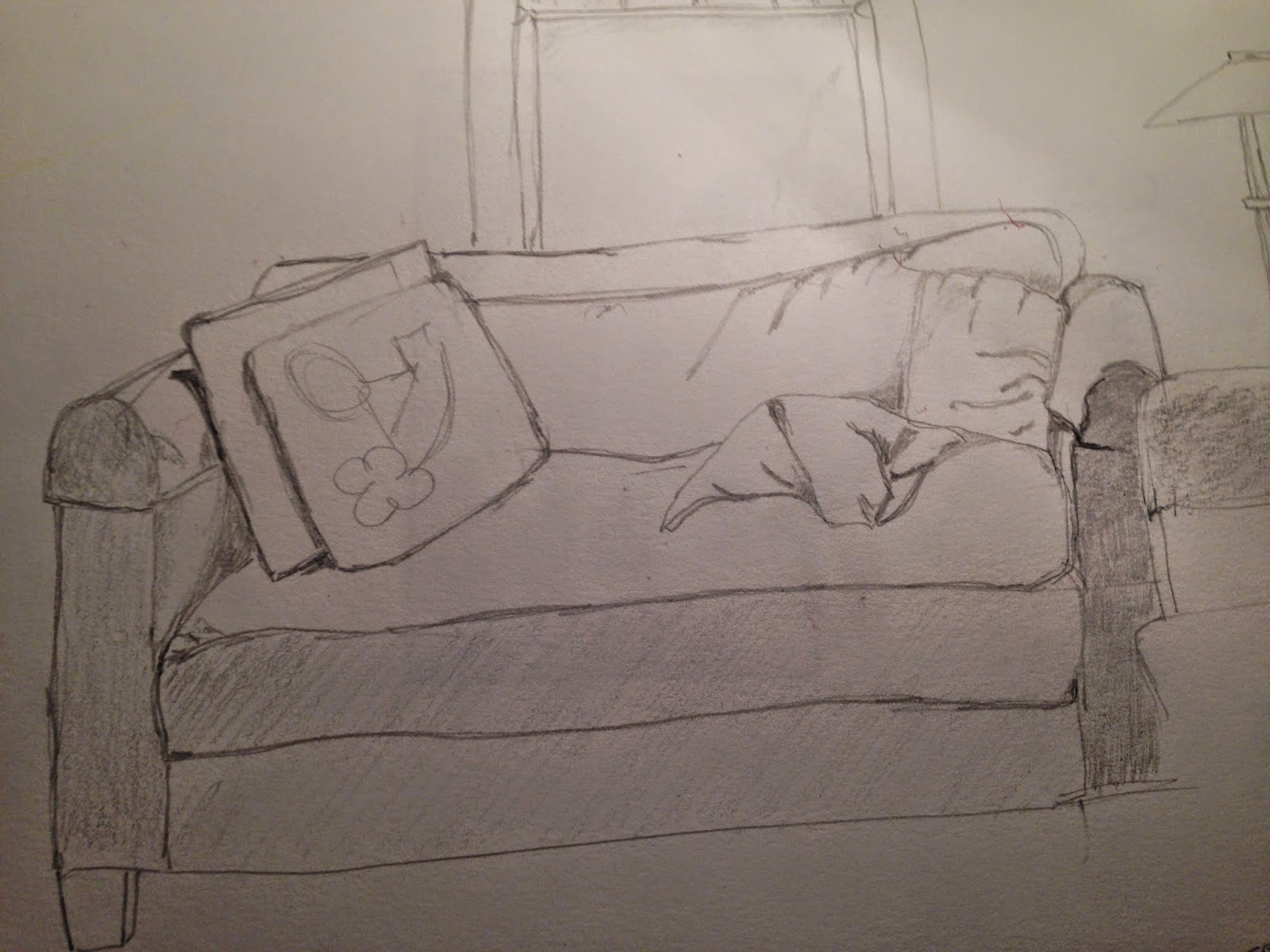 My sofa at the end of the room and its crumpled pillows. The table will go in front of it.

I thought about sending the sketch I made in anticipation of a painting but it is upside down for some reason and not really worked out. Most of my paintings don't take any working out but this is an idea that popped into my head and I have to see if it will work.