The surgery on the nose


Yesterday I went to the plastic surgeon to have the lesion that was basal cell carcinoma removed from my nose.  He was kind enough to prescribe some Valium before hand because I had been to him when I broke my nose and I knew that injections in your nose are very uncomfortable. In fact, they hurt. A lot. Dean went with me, hoping that he could watch and he was allowed to. It turns out that he and the doctor are both ex-Air Force and that Dr Vizer was a flight surgeon so they had lots to talk about. I entered the conversation once or twice but mostly listened. Yes, I was awake the whole time my imagination going full speed.


I asked the nurse for a blanket.  I wasn't cold, but with your face partially covered and you body not (I  had on my clothes) I felt strangely vulnerable-like I might float away. The security blanket helped a lot, just the weight of it. Weird.

After the lesion was removed they ran it over to the hospital lab  which is just across the street to see if the margins were clear and they were so he began closing. There is not a lot of extra skin on the nose so he had to do some fancy patchwork.  I am taking Tylenol and keeping it dry although I can let water run over it tomorrow afternoon. That will be a wonderful shower. I get the stitches out next Monday.  If you upset easily do not scroll down to the photo but if you are the curious sort it is below the signature.


Meanwhile, all is well, including me.
XOXOXO
Caroline


The lighting doesn't help much. 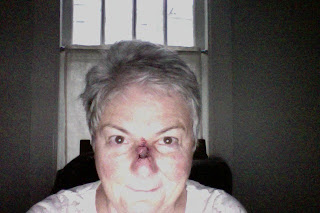 Chrissy said…
It looks terribly painful. I can hardly bear to think of how your nose suffered!
The only thing I've had when my nose was 'interfered with' was a needle passed down the tear ducts (one at a time) which emerged in my throat. Then the doc sent a saline solution through. It was weird but painless.
Hope you don't mind me telling you that.
I hope you'll feel and look very well again soon. Have a lovely shower!
August 9, 2013 at 11:37 AM