July 02, 2013
Today's adventure began about 2:30 AM or so when I was just about ready to turn out my light. Suddenly there was a thunder boom and before I could take a breath and clamber out of bed,  Jackson had moved all the things I had piled in front of the door and was disappearing down the stairs. I went to the front door and opened it only to find that it was pouring rain. I was in my little white nightgown and decided that Jackson was on his own for this one. After checking a few times to see if he had returned I went to bed.

At 6:30 this morning I had a call from a neighbor who had found Jackson while she was out walking. He was at one of the Lee University Dorms, several blocks away. Do you think he just wants more education? Someone, Jackson or other, had removed his thundershirt. I don't know whether or not to buy him another.

Justin, one of the guys working here,  cut a piece of plywood and screwed it to the door but it is a hollow core door, so we are not sure that Jackson will be stopped.

THEN, while I was making broccoli slaw to take to dinner tonight I heard a crash but no, it wasn't Jackson- the ceiling at the far end of the kitchen fell down! I nearly had a heart attack. 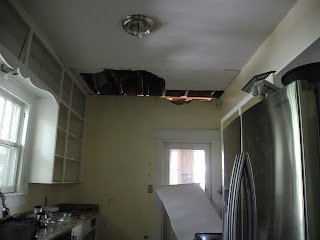 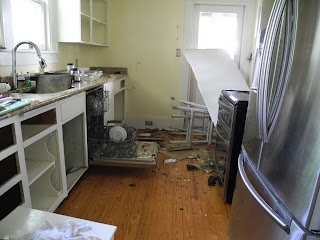 As you can see, the dishwasher is full of crud.  When the guys get here tomorrow I will ask them to move the sheetrock piece so I can get out to the laundry and out to the studio.
AND
I found another place where someone's foot went through the ceiling of a closet upstairs. Other than that things went well. The slaw was good, I got an area of the living room straightened, I had a good dinner with sister, brother, sis-in-law, niece and her family.
Now I am tired and I think that I will go to bed. I hope that you sleep as well as I think that I will.

Unknown said…
The crash gave you an early start on the ceiling!

Chrissy said…
My goodness, Caroline, you live in dangerous times! But not for long. I can see progress but to you it must seem like 3 steps forward, 2 steps back.
July 6, 2013 at 6:08 AM