April 02, 2013
Or do I cry? Here are some views of my laundry area as it has devolved during the construction. 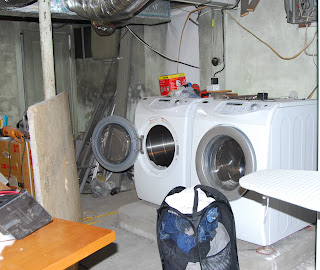 The "hanging" in the center back is a sheet in the doorway to the new cellar room which has no door to the outside at present. There is an opening, just no door. Handy, don't you think? We don't ever get locked out of the house. This picture was taken with a flash. It is truly not nearly this bright. Think dungeon but with a light bulb - maybe a 40 watt bulb; maybe less - a refrigerator bulb 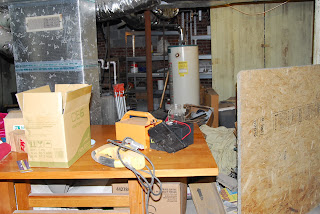 I had cleaned off the end of this table so I could put clothes on it to bundle them for a trip up the rickety staircase to the folding spot - my bed. (I used it after pulling back dog-hair covered blankets, etc. Gross, I know. )Dean, spying a horizontal surface, decided that it would be a good place to take apart the already-replaced lawn mower battery because he wanted to see if any of the cells still work. I don't know exactly why the saw is there except that it was previously in his hand at some point. 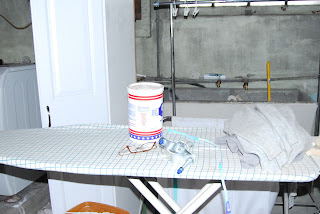 I could fold or bundle laundry on the ironing board but there is a tool of some sort, a large tub of handwashing goop and his glasses as well as a sweater waiting for the washer on it. 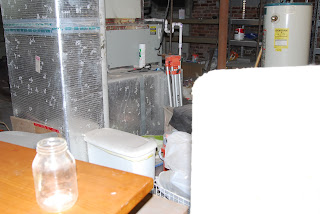 Back behind the table, but blocked off by a sheet of plywood and other large things, is the trash can in which I put lint from the dryer. 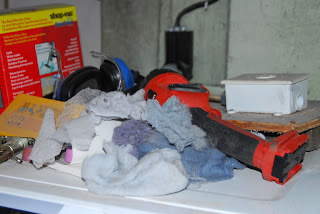 Is anyone into lint art? This is the top of the dryer. Our lint is mostly denim/dog hair colored. 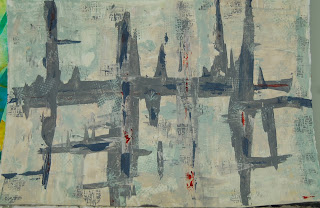 Here is a new painting. Dean says that it looks like an aerial view of a city after it was bombed in WWII. I think that I must have some buried anger. This is a good way to let it out, if that is true. I will have to ponder this. 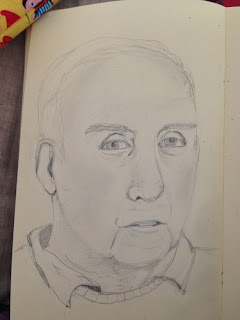 This drawing bears a slight resemblance to Frederick Buechner. It is, though not a perfect portrait, an interesting face, I think. Although I like to challenge myself to come as close as possible to the photograph I am using, what I really want is an interesting face - one you might want to look at.

Birds are calling, the sun is shining, all is well, and I think that I will choose to laugh. I will save my tears for something worth crying over.
XOXOXO
Caroline