This is a lesson on the history of construction in the early part of the 20th century in Cleveland TN and I think in most places, at least in the USA.

In addition to some really large and untidy squirrel nests made of insulation, we found the location of the original fuse box. It was moved, probably when the porch was changed,  to the basement. Its location here makes me think that this was once a room instead of the porch. It seems to have been about half the width of the porch and to have been the back entry to the house. 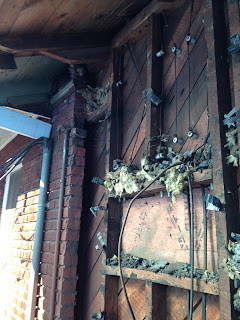 The style of wiring used was called post and tube. The white things you see are glass "posts" to which the wires were fastened with a second piece of wire. The wraps are very neat and very similar, not haphazard at all. The wires are fabric covered as was all electrical wire before the use of rubber and plastic. 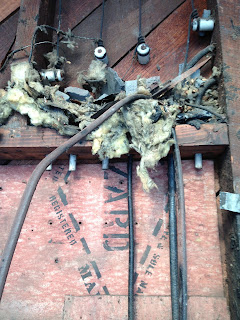 Sticking down under the wood piece are the tubes which went into the fuse box. Whenever wires passed through wood there was a tube to protect it. And that concludes the lesson for today. I thought that it was interesting and that you would want to know.