Evidently the third weekend in October is quite popular for weddings. Last year Sara 's wedding was on the 22nd and this year both Andrew (my nephew) and my cousin's daughter were married last Saturday. The cousin lives in the Memphis area, but the pictures of that wedding are great. It was a beautiful day there as well as in the Atlanta area where we were.  Andrew and Francis chose a 1920s theme and we all dressed up. The bride and groom were radiant and the guests had a wonderful time. Here are some pics; there are more on Facebook. 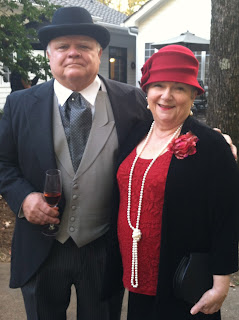 Dean and I. Doesn't he look cute? He chose and rented his outfit without consulting me and I think that he did a bang-up job. In fact, one of the single girls asked him to pose in a picture with her. Drew and Francis had the photographer taking funny portraits in the barn where hay bales and farm implements were available to use as props. There were lots of "American Gothic" poses. We got the whole family there for one and that took quite a bit of collecting and recollecting people. The old familiar "herding cats". I hope that the picture turns out well; would it be too much to hope that everyone's eyes were open? 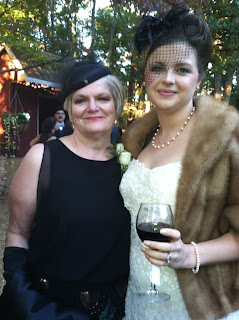 The mother of the groom (my sister,Vicki) and the bride, Francis. Yes, she spells her name with an "I". Her mother calls her Francie.  She is wearing a hat that was my mother's and a
mink stole she bought here in Cleveland at the Antique Parlor. She is also wearing on her right hand an amazing emerald ring of her mother's. Outstanding! 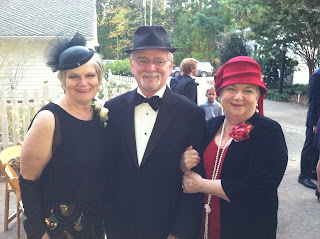 The siblings, Vicki, Buddy, Caroline. The sequins of Vicki's skirt change colors and show violet, copper-pink, teal blue, and gold. I found the hat at Dillard's department store. I guess hats are trying to make a comeback. I found several old hats that vied to be worn, but this one seemed best in the long run. I plan to wear it to church this winter. I'll wear the other ones, too. 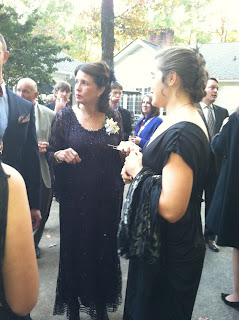 The beautiful mother of the bride and the maid of honor, Mary, sister of the bride. Mary is a boxer and hopes to get on the Olympic team. Martha, her mother, says that Mary is the gentlest of the eight children. Martha was Miss Nicaragua a few years ago. She still has a slight accent that is just lovely to listen to and she is still quite beautiful. 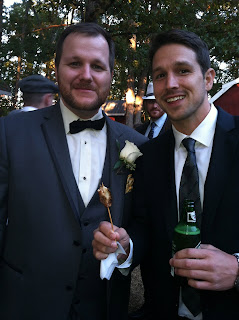 Drew (Andrew) and Elliot, his brother and best man. Having both there and cleaned up at the same time just shows how important weddings are. Elliot brought his girlfriend, Elise, for us to meet and we all liked her. Who knows if another wedding is in the cards. Elise and Elliot will be moving to Charleston next month, so we hope to see more of them. El has been in CA for the last several years. 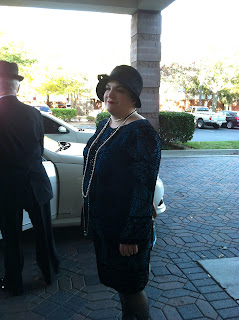 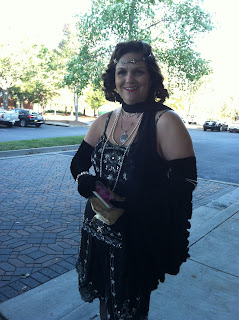 Jenny, our young matron (mother) and Sara , our flapper. I thought that my girls looked so good. Greg wore a tux and a hat and carried a grey cane. Alex and the children couldn't come. We missed them but Jenny did have more freedom than she would have if the children had been there.


We are all tired but happy to have been together. My nephew and his family were able to come from FL and my brother's younger children were there. Vicki and her (ex) husband hosted a party Friday night where we all had fun and on Sunday morning we all got together for breakfast at the Flying Biscuit (where you get a biscuit with your French toast). It was so good to be together.

Thanks for reading, and I hope that your day is filled with blessings.

Unknown said…
Reading your beautifully written account let me enjoy the moments all over again. Thank you.
October 24, 2012 at 3:57 PM