Local news and a story

Here is the local news. The headline of Friday's paper. We did not go to the festivities, which were in Charleston, TN, just up the road from here. Aren't small towns great! Cowpeas, for your information, include black-eye peas, crowder peas and some other similar peas which were once fed to cows but have migrated to the table. And yes, there is a cowpea Princess. 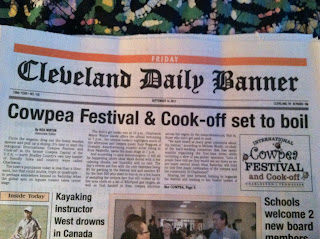 Remember when I showed you my "carpentry"? Well, the dowels had a tendency to slip out of the holes in the shelf supports so I had to do the girl fix on them. That means that I didn't go to the hardware store, buy any tools, any parts or any of those things that men seem to have to do to fix anything. 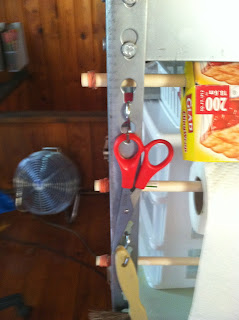 These rubber bands come on the newspaper (see above) and they pile up unless you throw them away. I was glad to recycle them. 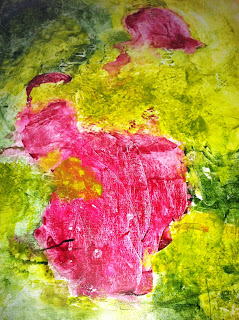 Now for the story. When I first began taking painting classes I made a green and red pour. I looked at it and looked at it and finally saw a dress and thought that there might be two people sitting in a garden, facing each other. I thought they might be mother and daughter, having a moment of sharing. However, when I said that I saw two people, others in the class thought that I meant a girl and a guy. This is where I made my mistake. Although their idea was certainly as good as mine, I should have stuck to my own idea just because that was the way I saw it. However, I was swayed. 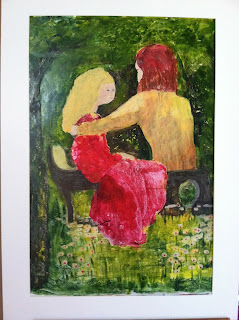 I was ready to put this in the dog pile (those paintings that are just not good) but decided that I would give it one more chance. I have changed it quite a bit and even since this photo have changed a few things. but here it is. Sweet scene, not good art. 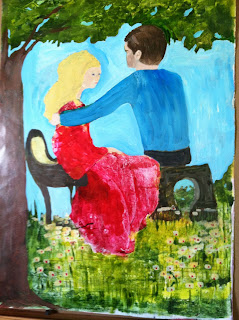 I have fixed the spindly leg on the chair, raised the horizon on that side, evened out the sky and lightened his face - no more five o'clock shadow -  since this photo was made. I think that I could have painted a more convincing woman and maybe I should go back into it and try.  The moral of the story is that you should stick to your own vision unless you discover some compelling reason to change it. Kind of the "follow your bliss" thing. It might not have been a better painting, but then again it might have.

Do you ever cave to peer pressure or have you outgrown that? I would like to think that at my age I could hold out for my own vision, and next time I will, even if my vision is something no one else shares or sees. Who knew that a painting class could teach such lessons? As I said before, Old Dog, New Tricks.

Unknown said…
I think I could possibly enjoy some cowpeas right now with chow chow on them. Yummy
I had no idea you felt so pressured by the class or that they gave you so much input. In a way, I'm jealous. I don't think anyone other than Sandy has ever made a suggestion to me unless I specifically asked and then it was something minor not the entire direction of the painting. I must be off in a world of my own...

Caroline said…
They didn't pressure me. Someone said "he" and someone agreed and Sandy said he and I gave up my original idea.. It wasn't the class, it was my being unsure of what I should do so I went along with the suggestions instead of following my own idea. The"pressure was very gentle if it was there at all.
September 16, 2012 at 3:44 PM

Chrissy said…
I think the steps you took to do this are just brilliant. Such a fascinating journey.
September 18, 2012 at 2:56 PM