Well, maybe not carpenter, but I did use a saw and a mitre-box (both mine) this week when I decided that I needed a place to put paper towels, cling film and wax paper in my studio. Old dog. New tricks. Again. 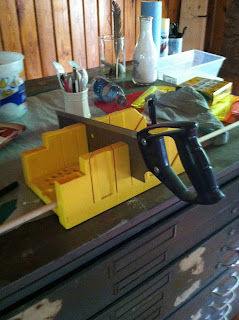 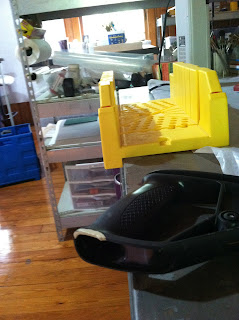 I had lost the pegs that hold boards, etc. in place for cutting but found that a Faber Castell Pitt pen was just the right size to use. (below). A dowel would have worked but they were what was being cut! 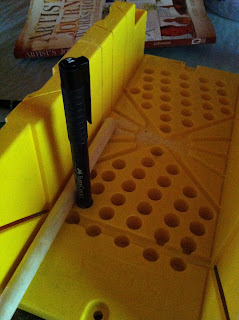 Unfortunately,  I didn't realize that the mitre-box would fit over the front edge of the table to stabilize it until the work was all done.(top right) Then again, I only cut three pieces of dowel from two longer lengths, so I didn't have much struggling to do. 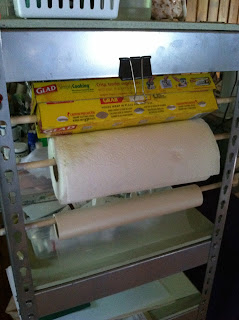 Here is the finished project. The dowels slip into the holes on the shelf supports and hold wrap, or anything on a tube. I can easily remove them to take them to class if I want to, but they aren't on top of other things or falling off onto the floor. I feel very clever in a limited sort of way.

Vicki came over to tear down some watercolorpaper with my large ruler as guide and ended up staying for an equipment/furniture moving party for two. She even suggested that we move the flat file which weighs a ton and required disassembly before we could even budge it. I was exhausted all the next day. She is younger so she might have been only tired all the next day. I hope. 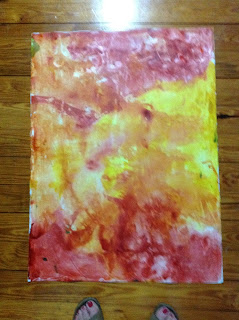 When it was all over I made this "pour", pouring and spreading acrylic paints to make a base for a new painting. More to come on that when I get to the next step. 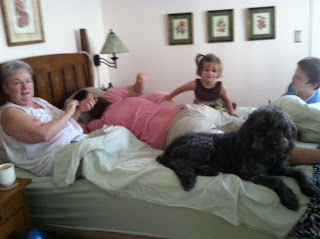 Jenny, Alex and the grands were here, arriving Friday night and now gone because the children have already started back to school. Their system goes nine weeks on, two off, nine on, two off, nine on, ten off ; they start back at the first of August. Anyway, they were all here Saturday morning and one by one drifted in to our room where I was sitting in the bed drinking coffee. At the point of this picture Drew had just said, "Six mammals in this bed - five homo sapiens and one canine." Family. I love it.

How is your family? Have you finished any interesting projects recently? Started any? Are you just melting in the heat or has it cooled a little where you are? Inquiring minds want to know. Leave a comment. If it is just too private, try email at carolineberk@gmail.com.

Unknown said…
Well, yes, I did suggest moving the flat files. What WAS I thinking?? At any rate I hope that you like where we put the files because I REALLY do not want to move them again!!! Glad you accomplished your dowel project. :-)
August 6, 2012 at 7:29 PM

Unknown said…
I envy your choice to immerse yourself into creativity. even tho I think of myself has having some talent in that department, unlike you I only think about getting busy with "it". --Scott J. in Asheville
August 6, 2012 at 7:33 PM