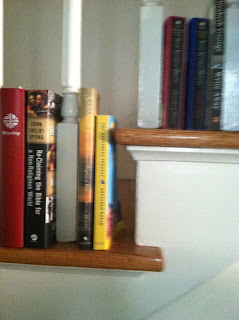 Today I remembered a book from my childhood called Those Plummer Children written by Christine Noble Govan, a Chattanooga author. I am sure that the book is no longer available; it was very regional as well as non-PC. The Plummer children had a black woman who took care of them and the "N word" was probably used. This and an article I read on the Huffington Post site made me think about the "colored help" of my childhood. We weren't allowed to ever use the N word, but at that time, to call someone black was not a compliment, nor was African American used, all citizens being just Americans. People of color (and we knew or saw no Latinos) were called colored people or sometimes Negroes, pronounced Neegrows so it wouldn't come out Nigra and sound like that other word. We had some wonderful help over the years. One woman, Johnnie, had a daughter, Annie, who was my age but was reported to practice the piano gladly. I never met Annie, that paragon, and have often wondered how we would have gotten along. I wanted Johnnie to teach me how to iron but she wanted me to practice my piano lesson. Johnnie won. 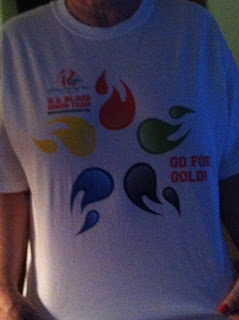 Tuesday I gave blood. The shirt says "US Blood Donor Team".  I hadn't given in quite a while but will begin again until I am too old. There is so much blood used for people who have cancer, that there is always a great need. Interestly, women my height (5" 3/4") can only give whole blood. Who would have guessed. The people were very nice and I am going to have my hair cut like Sheila's. Sheila did the stick, etc. on me and she was short and cute and had very short hair. I will post a picture if my hair looks good and if it doesn't you will never know because there won't be any photographing done!! 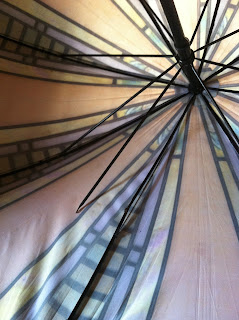 I am trying to fix my favorite umbrella which has a bent spoke and a disconnected mechanism. I have the spoke stitched back in but I ned a third hand to hold it while a run a wire through the hold that once had a rivet or grommet or some such. I have gotten it there but couldn't hold it and get the wire and... I just have only two hands. My daughters gave me this umbrella years ago and it is my favorite. Frank Lloyd Wright made such lovely designs even if he wasn't quite the role model we might have wished. 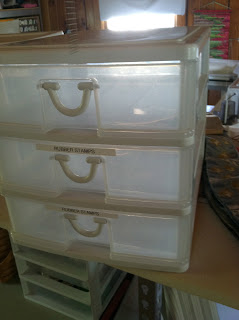 I emptied this little stack of small plastic drawers today and put the contents in another small chest and the flat file. Slowly but surely I am getting my supplies sorted out, and gathered together by type and use. Now I will donate this to someone who will put is to good use, I hope. It is so good to see little spaces being cleared and like things being stored with their like. It takes less space and makes everything so much easier to find. I can actually get some work done!!

I did a few small works on paper also, but will show them to you in another post later this week.

Thanks for stopping by. Let me hear from you from time to time. Love to all.