May 22, 2017
It was a wild week here. Sunday a week ago we had to move everything to the middle of the rooms so that new windows could be installed. That was done on Monday, Tuesday, and Wednesday. As the old windows, never opened since we have been here because they were painted shut inside and out, were removed soot flew all over the house. I thought that we had gotten rid of it all over the last few years, but there was some in the window innards. We now have windows with double panes that open and close and can be washed from the inside. We hated to take out the old ones with their wavy glass and BB holes, but the time had come to let common sense rule and being able to clean them is really nice. Besides being painted shut the old ones had rusty screens in places and permanent storm windows which provided a dirt trap between window and storm, not reachable by any but spiders.

After moving furniture back and cleaning up there was work done in the garage and then a huge and I mean huge storm during which we lost power for about an hour and 15 or 20 minutes. It turns out that near here the wind tossed a limb on a power line and after causing brown outs and blackouts and ons and offs the tree caught on fire so the fire department had to have the power shut down in the entire area. Life is so interesting. It was across the street from the mother of one of the guys who was working here. Who needs newspapers? Who needs TV? Get your information from the source!

Here is a sketch I did today with the knife that I think I will paint larger and maybe with a brush. I like the orange and blue and you know that I like that little jug with the Pothos. You might see it several more times. 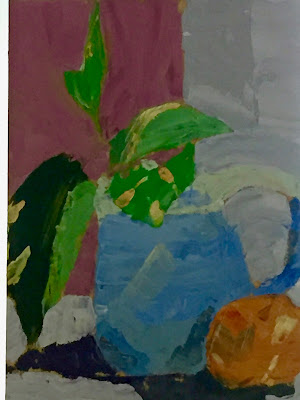 I will be going to Columbia for a workshop this weekend so I am not sure how much painting I will get done.While the furniture was moved I took the opportunity to move things around in the studio and still don't have it quite arranged (how do you lose a lamp?) so I am working on that as well as packing paints and clothes.

I hope that your week was just interesting enough.

All is well and ask will be well,
XOXOXO,
Caroline