May 08, 2017
I didn't know about the real Pacific floating garbage island. or whatever it is really called. I pictured since I first heard of it, a large conglomeration of plastic bottles, ropes, fishing line and other trash caught up together in a floating pile. Today I did a little research and found out that it is actually tiny particles of photo-degraded plastic forming a kind of soup - not visible from space and hard to define on the surface. Of course tiny particles are much more dangerous due to their appearance being so like plankton and their composition containing all sorts of the plastic we are warned not to use because they are dangerous to our health. The fish didn't get that notice however and eat those PCBs , passing them long to us by way of larger fish.

While I was in my unaware state, and taking the acrylics classes that I did, we were given an assignment which called for
making some large shapes and following up on that For some reason (obstinacy? trying to be different? stupidity?) I chose a huge canvas - 4'x5'. I can barely reach across it and turn it. I painted something. It had a purple background and it was basically a lot of nothing. A lot. of. nothing. Then I darkened the background. Now it was a lot of nothing on blue-ish black. I decided that it looked like trash in the...where was it? Were those archeological fragments? Maybe they were. Or maybe not. I changed some of the large shapes and added some of the leaves. Was that a fish? A teapot? I changed more large shapes and made the background light blue/aqua. Maybe it was a fish eye view of the floating garbage in the Pacific. Yea that's what it is. I had better do a little research - and there my bubble burst.

Out to the garbage it is going Some things only deserve a limited time, space and thought. This one has used all it is going to get. You win a few you lose a few, some get rained out. 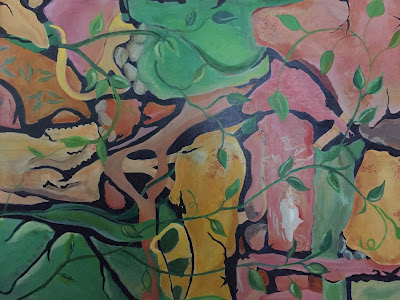 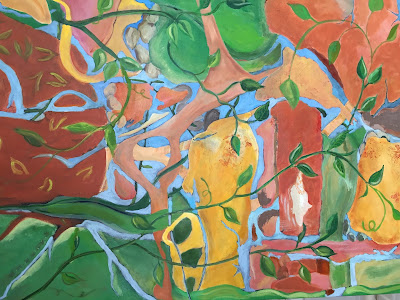 Even so
All is well,
XOXOXO, Caroline