Grab your hat and don't forget your shoes(edited)

March 06, 2017
This has been modified to show the first painting which for some reason did not appear on the original post.
My sister told me after my last post that I write about strange things. But this is not strange, it is my latest try at a still life. I painted it twice and there are differences. I think that probably one is better here and the other there. You can decide what you think. I am including the photo I made of the set-up but you should know that the painting was done looking at the set-up and not the photo and the angle was slightly different so the paintings are not copies of the photo. 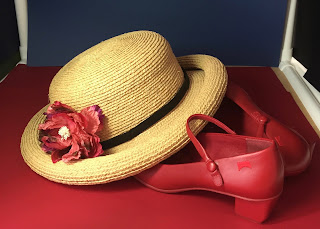 This is the photo of my hat and the red shoes I wore to the red shoe gala which supported CASA -Court Appointed Special Advocates. In other places this program is called Guardian ad Litem. They work with children who need advocates in the court system; children who might otherwise fall between the cracks. It is important work that we support monetarily but so far we have not volunteered our time.  I admire those who do, including my friend Karen. 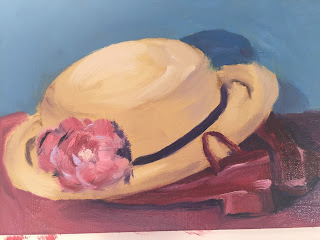 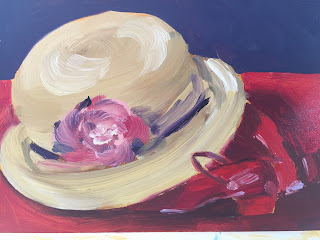 One of my painting friends has the kind of eye and hand/eye coordination that allows her to make paintings that are photorealistic. That is not something that I will ever be able to do, but I think that I am learning to make marks that let you know what I was looking at or thinking about; that makes me happy. I also have confidence that after a few hundred paintings I will look back at the early ones
and be able to say that there has been improvement.

I won't paint this again right away, but I have nothing in mind for the next post. Well I might have something... .

All will be well,
XOXOXO,
Caroline