April 30, 2015
I don't have much to show you, but I am working hard. I have looked up reference photos, pulled things off, glued things on, sanded, scraped and painted. I still have what may be several weeks of work to do. I am enjoying the work, don't get me wrong, but sometimes I wonder if I have bitten off more than I can chew. 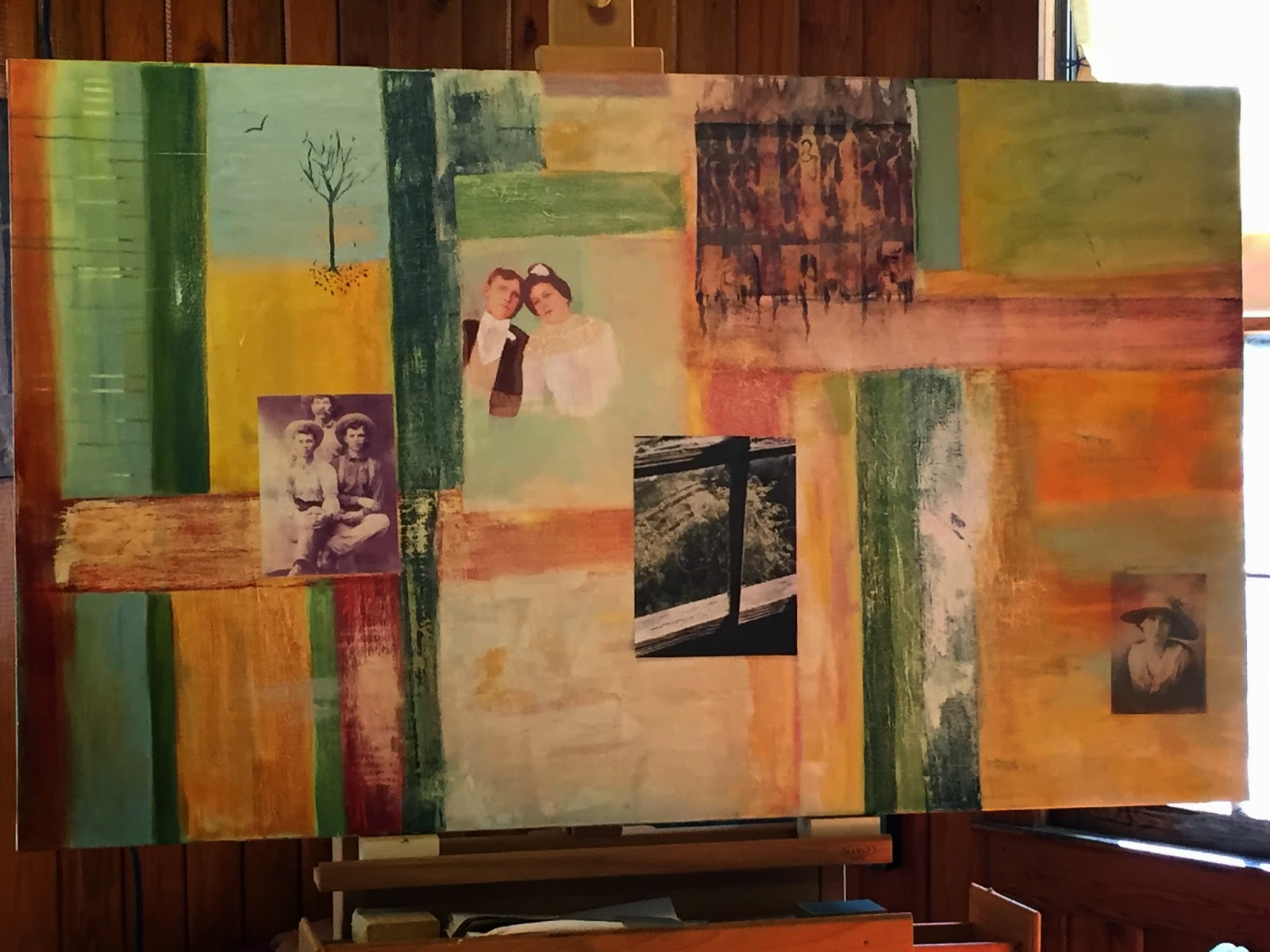 Here is the way it was. The dark piece in the upper right center is a photo of some rusty corrugated sheet metal that seems to have figures in it. I began with it but as I progressed it had less and less significance to me so...

I ripped it off. The gesso and paint also came off  but I can fix that. Working on a painting like this requires a lot of sitting and looking at it and waiting for an idea of what to do next. I am going to have to move a microwave out there to reheat my coffee - or maybe just take a pot out. The lack of running water is a small problem, though, and you realize that without running water that other necessity isn't there either, so maybe I should keep going to the house to warm coffee and do"other things". 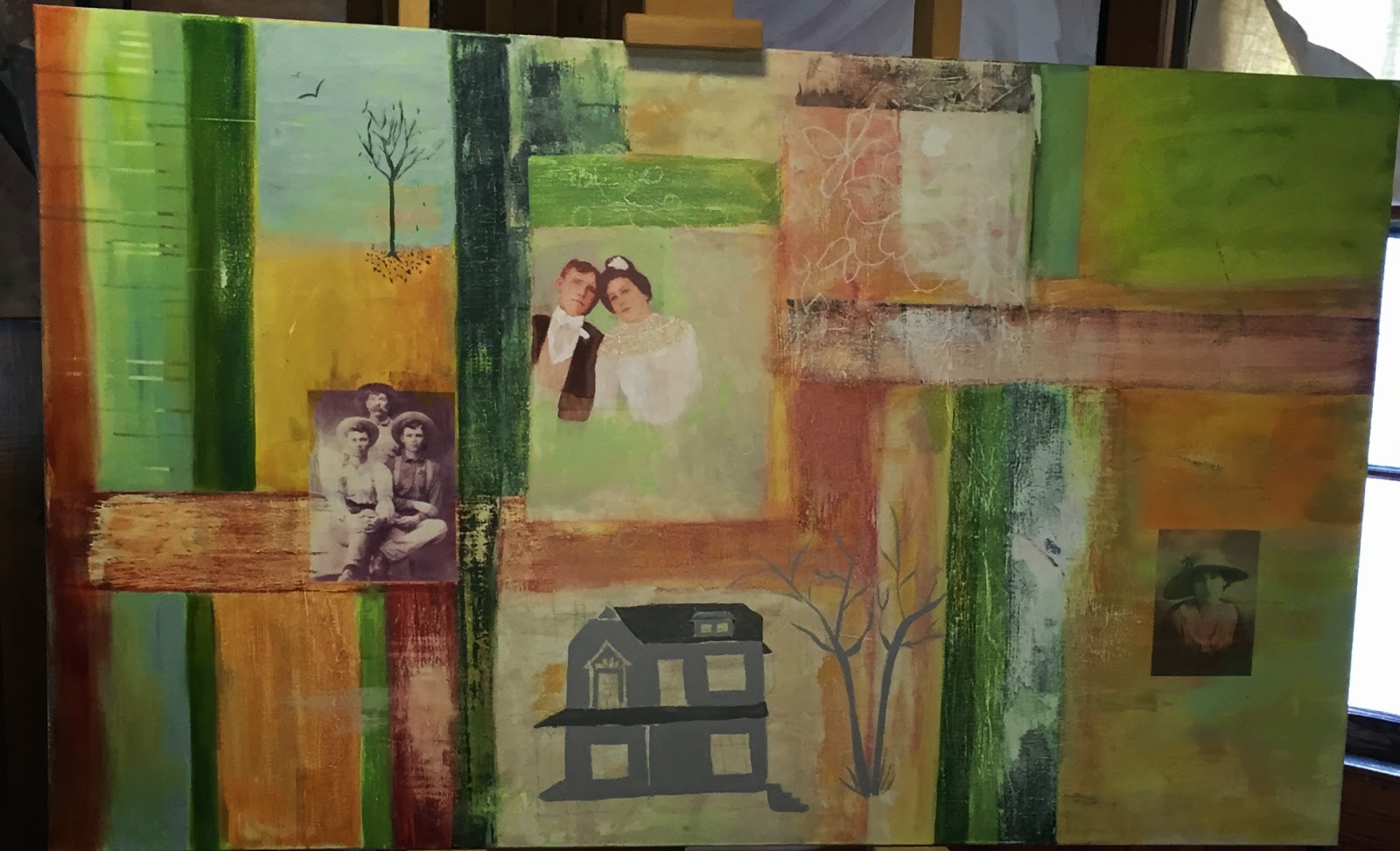 All the people on the painting are kin to each other and all, therefore, are kin to me. The two women are my grandmother and great-grandmother. My great-grandfather, his brother and his brother's sons are also there. The house (just begun - it needs windows, doors, rails around the porch, etc. curtains, lamps, a nice rug, new bedspr.....I get carried away) is one where my grandmother, her mother and her siblings lived in 1906. I will be adding flourishes (you might see the flowers chalked in) and such and doing something about the large dividers that remain. I might just paint the dividers or whitewash them - Tom Sawyer, anyone? 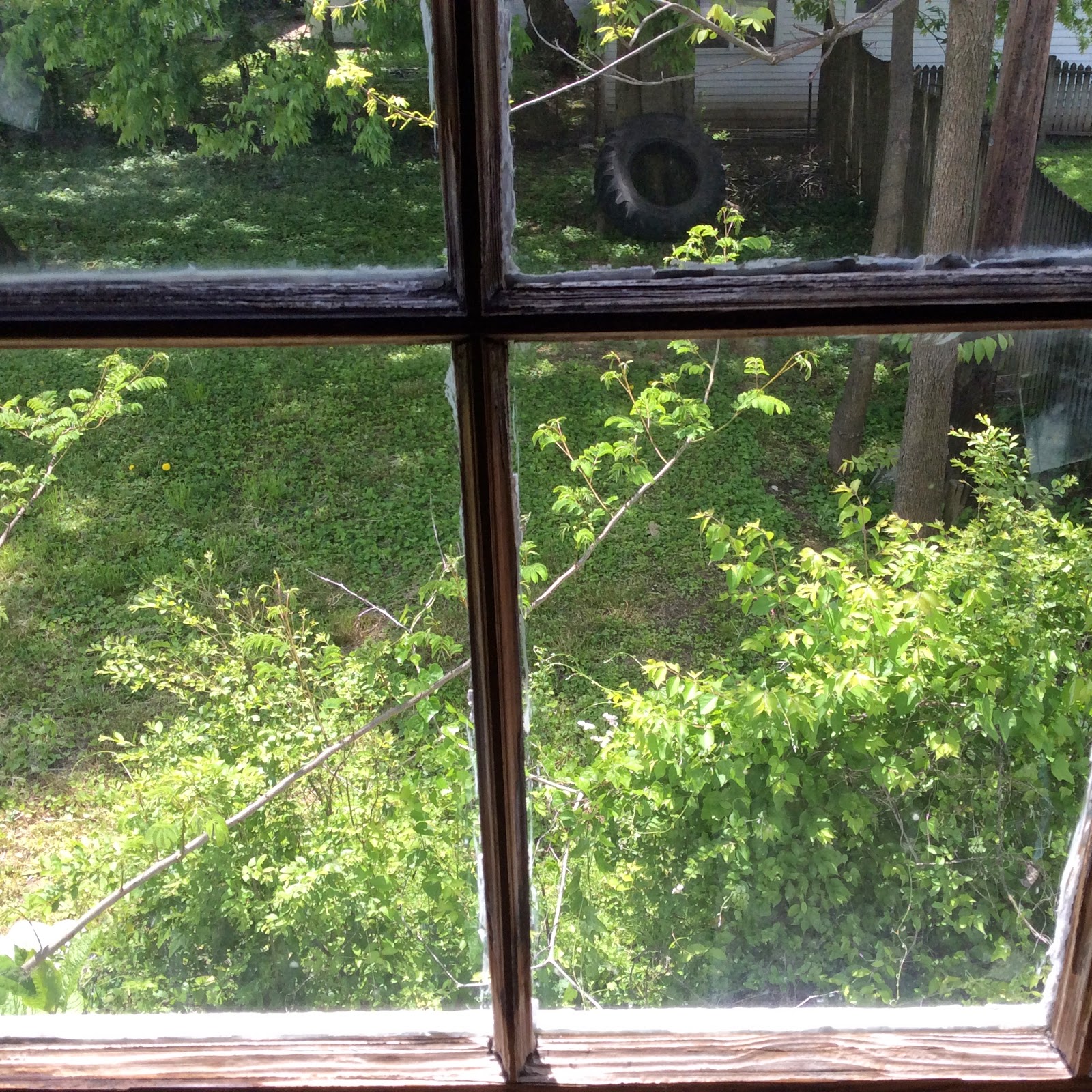 I thought that I might be able to work in this window or another photo I have of an old locked door, but they seem to be holding out for a piece of their own. This, by the way, is a picture from a side window of the studio into a neighbor's backyard.

I have some other paintings to work on for an upcoming show to which I would like to submit some work. The show is titled Rural South and I have a house, a different one, in mind to try to paint. I also have a work on paper started that is about fog(below) and it is halfway done; more fog needs to be added and a lot of little finishing things. Atmospheric and a little weird is what I am aiming for. Weird is not hard for me. Atmospheric? We will see. 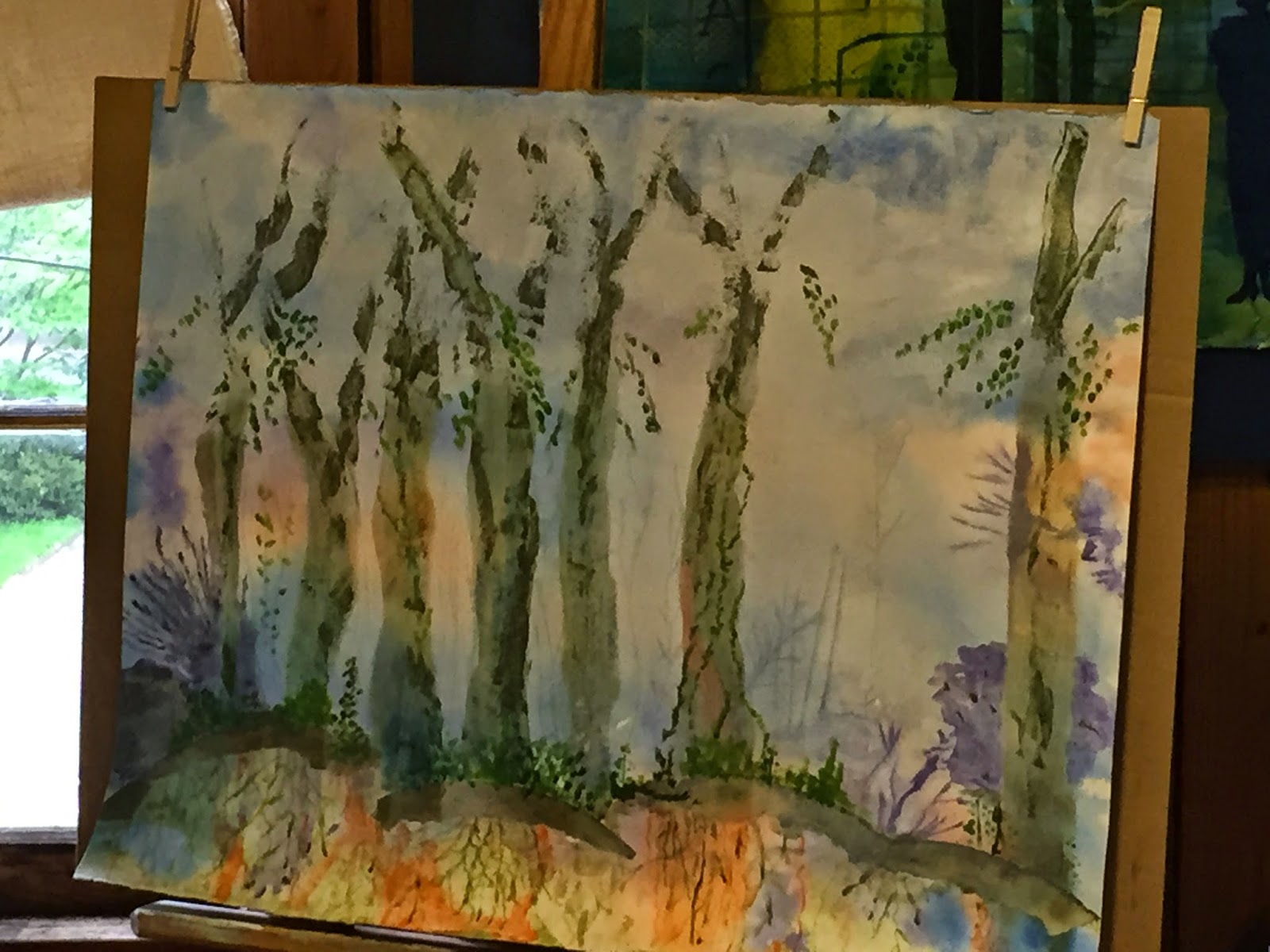 This will be a companion piece to the Creekbottom one that I recently finished and it will be Creekbank. 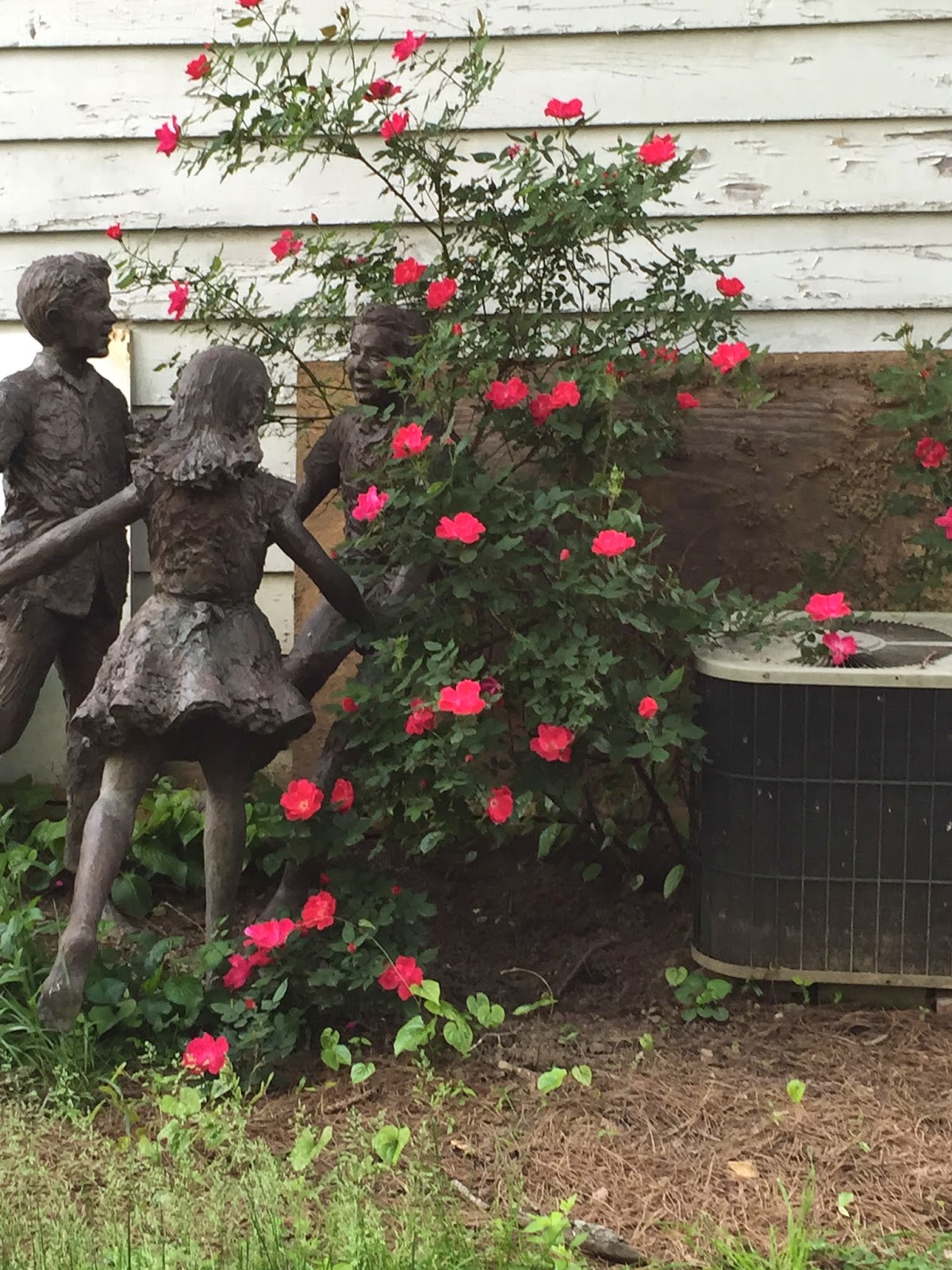 The roses will definitely make the cut on the big canvas; I plan to place some near the bride and groom and other in various places - maybe climbing on those rough wood dividers. These are in our backyard near our Kids, a sculpture we bought several years ago when we were in NM.

For the next little while there won't be much that is outstanding to show about the big painting, but I appreciate your being here for me to talk to.  I will continue to post about art and the house and I hope that you will continue to read. I like to think that these words are being received somewhere.

Unknown said…
A canvas that large takes a lot of work for sure!