April 23, 2015
Somehow I got it into my head that I would like to paint large. A canvas became available and I went for it. Now I had painted large before. The blue hippo, now at Jenny's house, is 36"x36". The Rose is 30"x30". They at fit into the car with room left for the three from Cleveland to drive to Chattanooga to class. This canvas is 36" x 60". That is my height by more than my width (although I am deeper - much deeper). The back seat in the car has to be put down and the canvas fit in at an angle. What, you might ask, was I thinking?  Well, I am not so sure that "thinking" is the word to use here. I have never been one to hold back so I just jumped in.

The canvas has been in the studio for several weeks but I have been busy. However, yesterday I decided to go for it. I gessoed it with two coats and today.....I began.

I made two large marks with dark blue paint. Hmmm, The brush didn't hold enough paint to make smooth marks. Must get a different large brush. Deciding to just go on with things and deal with the marks later, I began adding some yellow and, getting into the blue, some green. I stepped back to look. The large marks I made were practically lost on the much larger canvas. Not only that but they were bad ugly. More than any other thing they resembled a hammer and sickle. I vaguely remember the House UnAmerican Activities Hearings but I remember them well enough to want to change those marks. 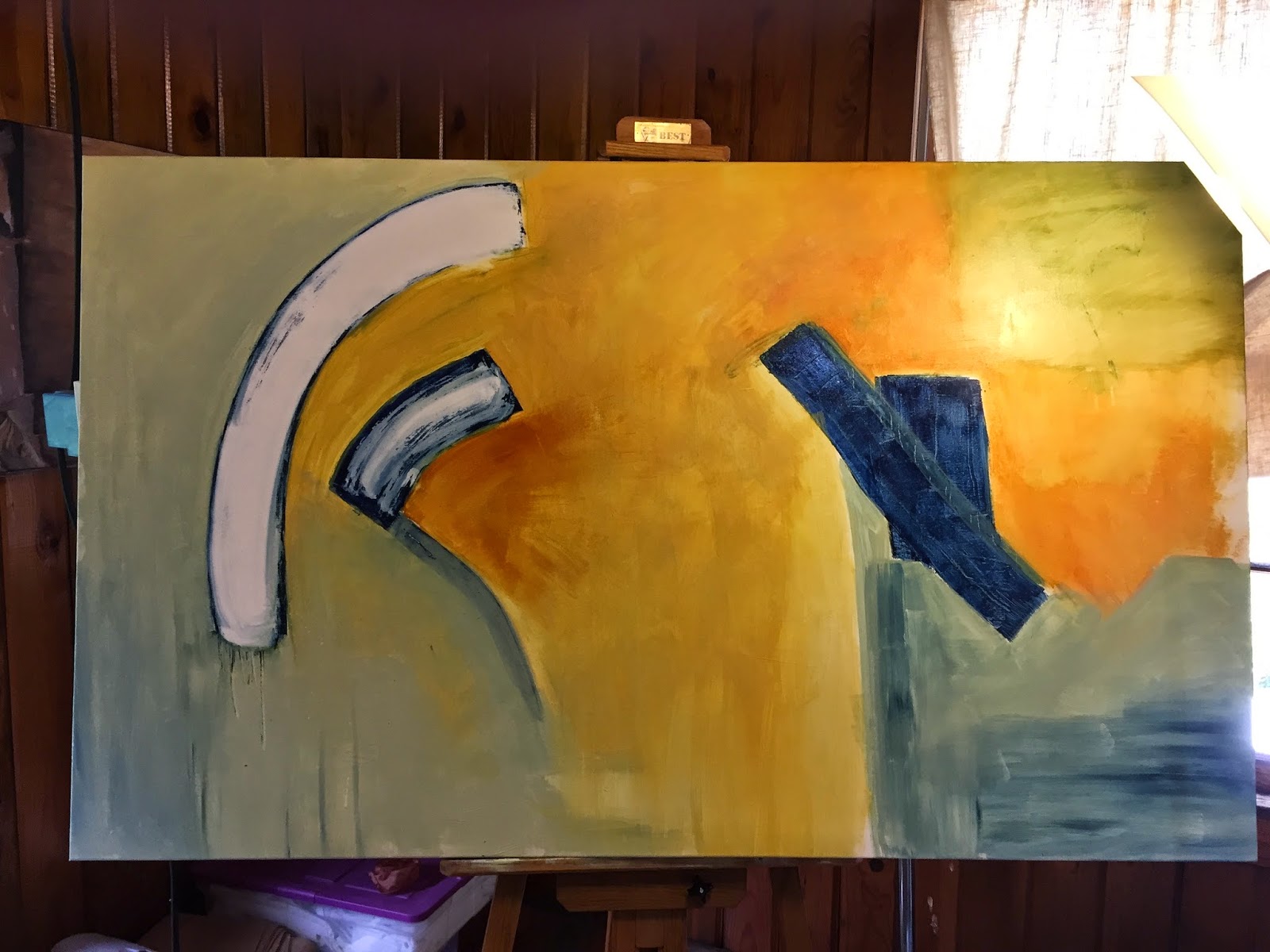 By the time I thought to photograph the progress I had already wiped off the first blue mark and started on the second. Then I decided that I didn't like the others any better. 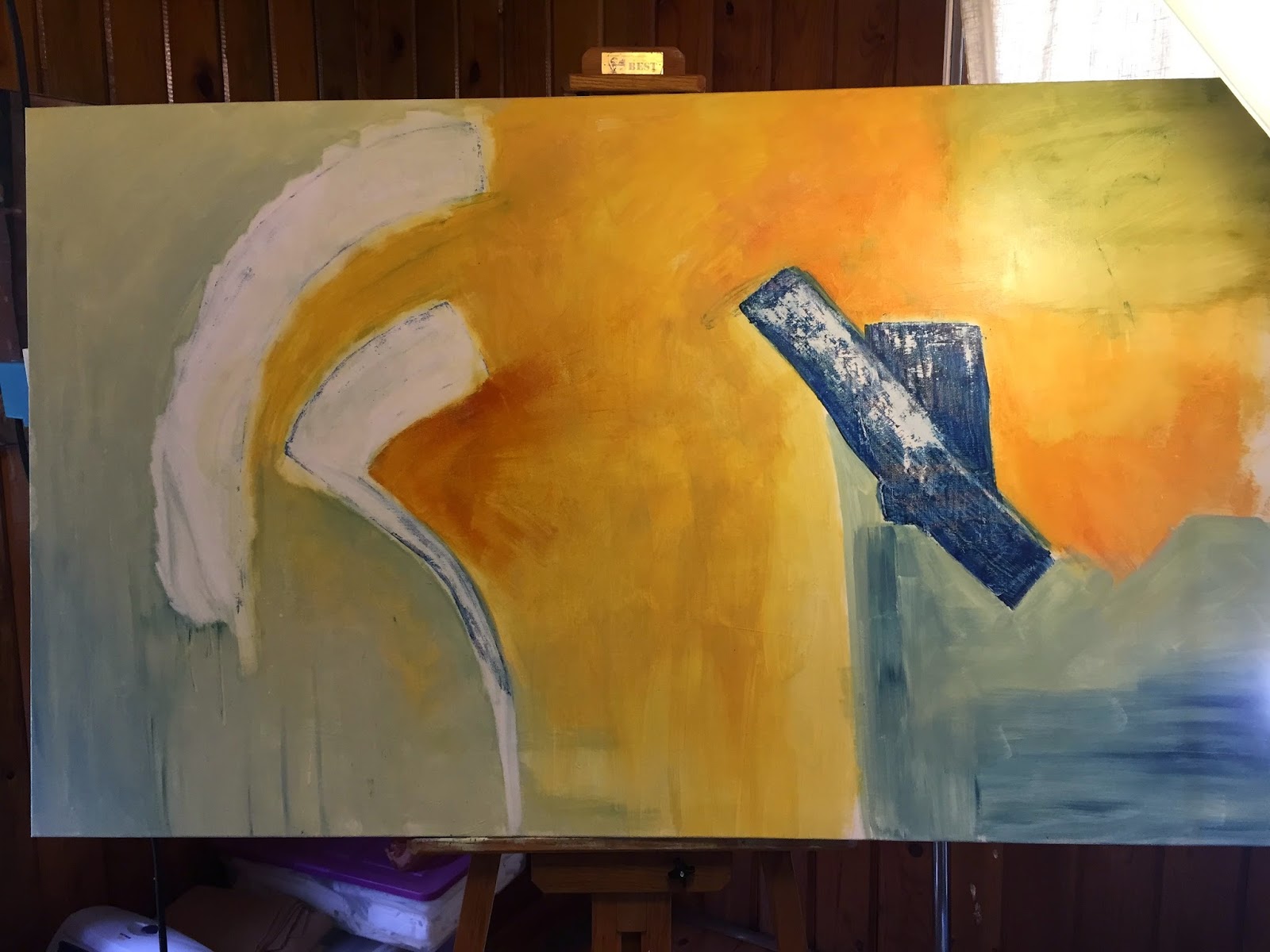 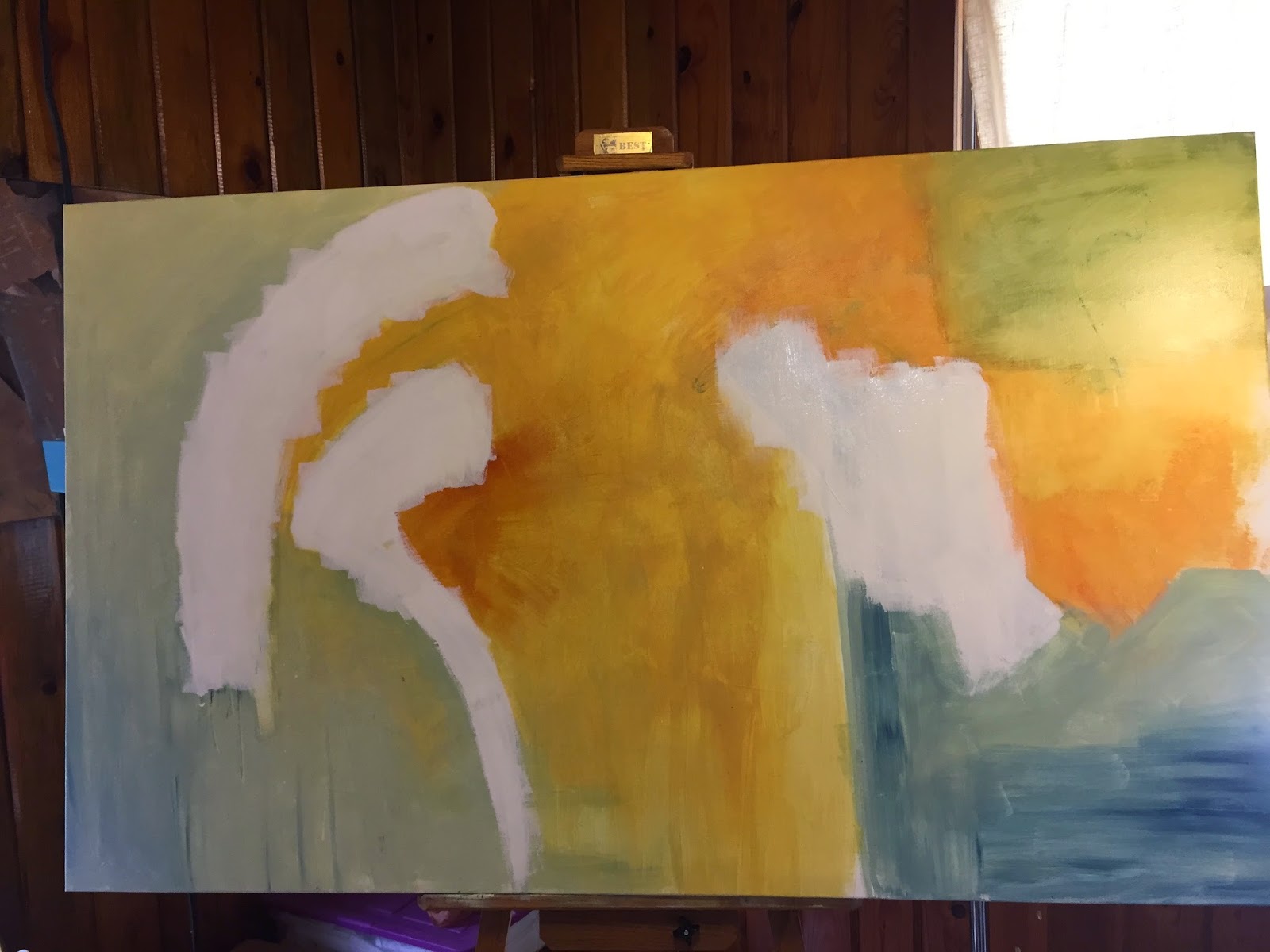 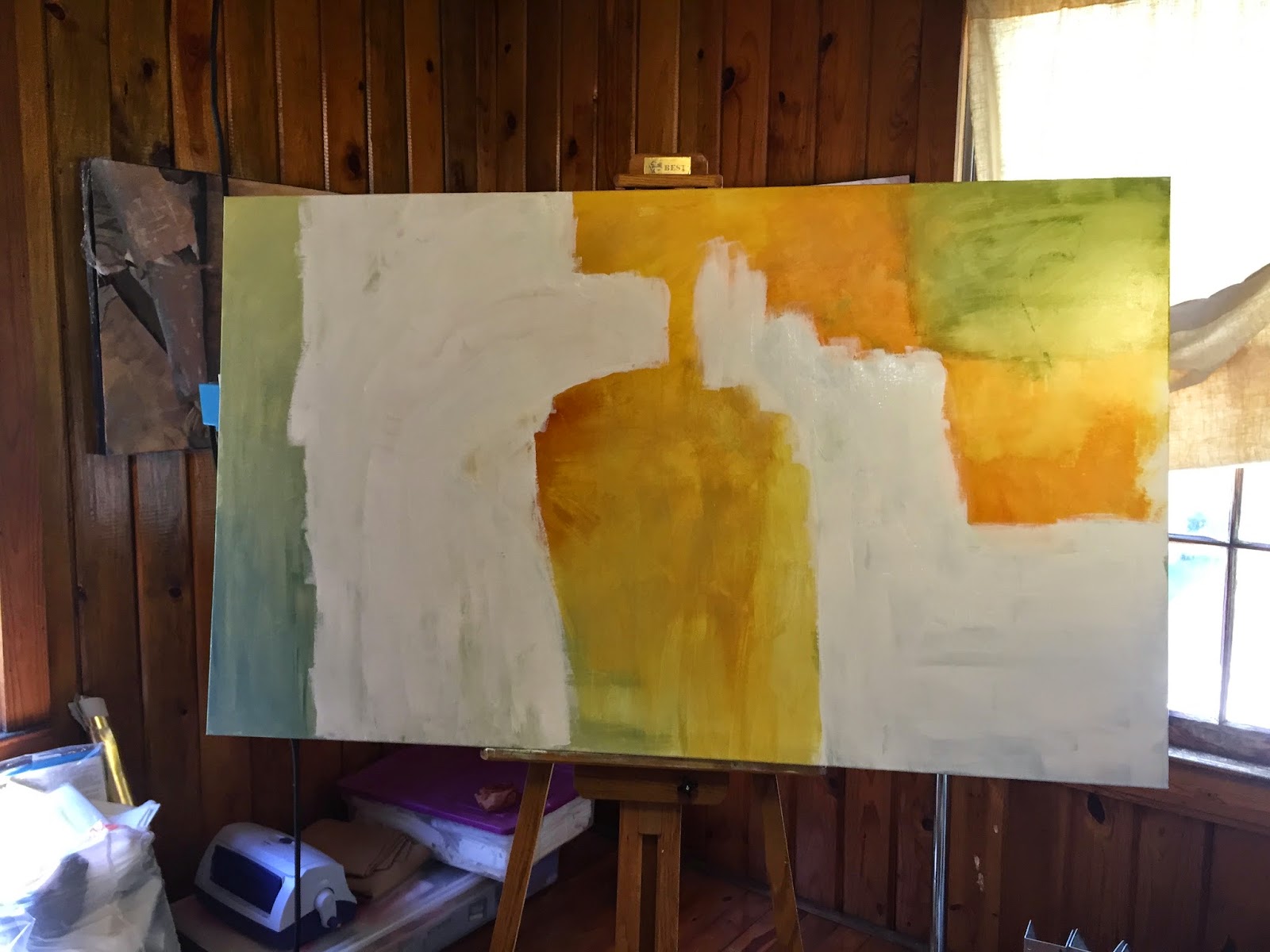 I began again. This is a little better except for the magenta Don't add a color that wasn't in your original plan. I added a little magenta and ugh! I had to wipe it out. 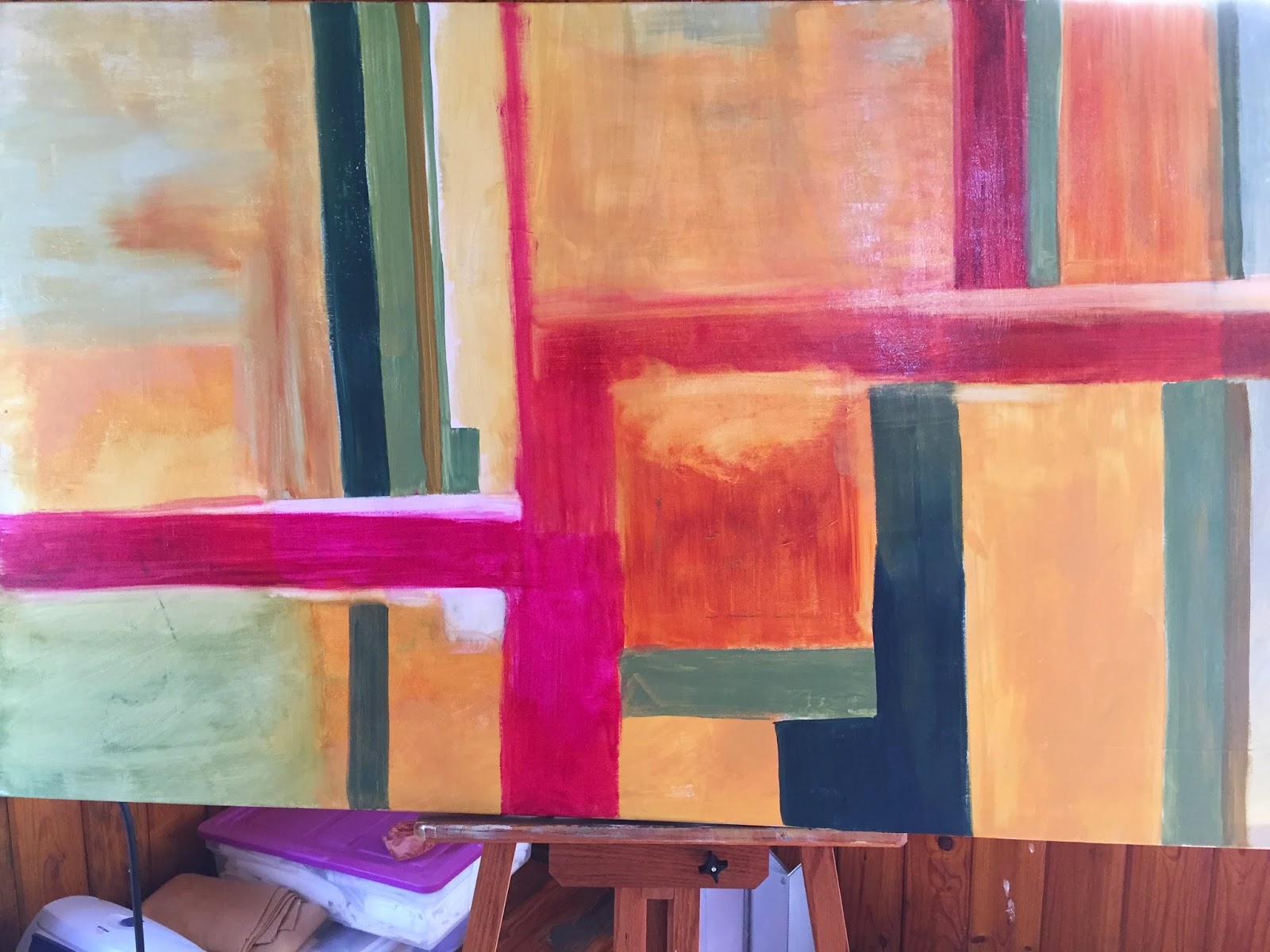 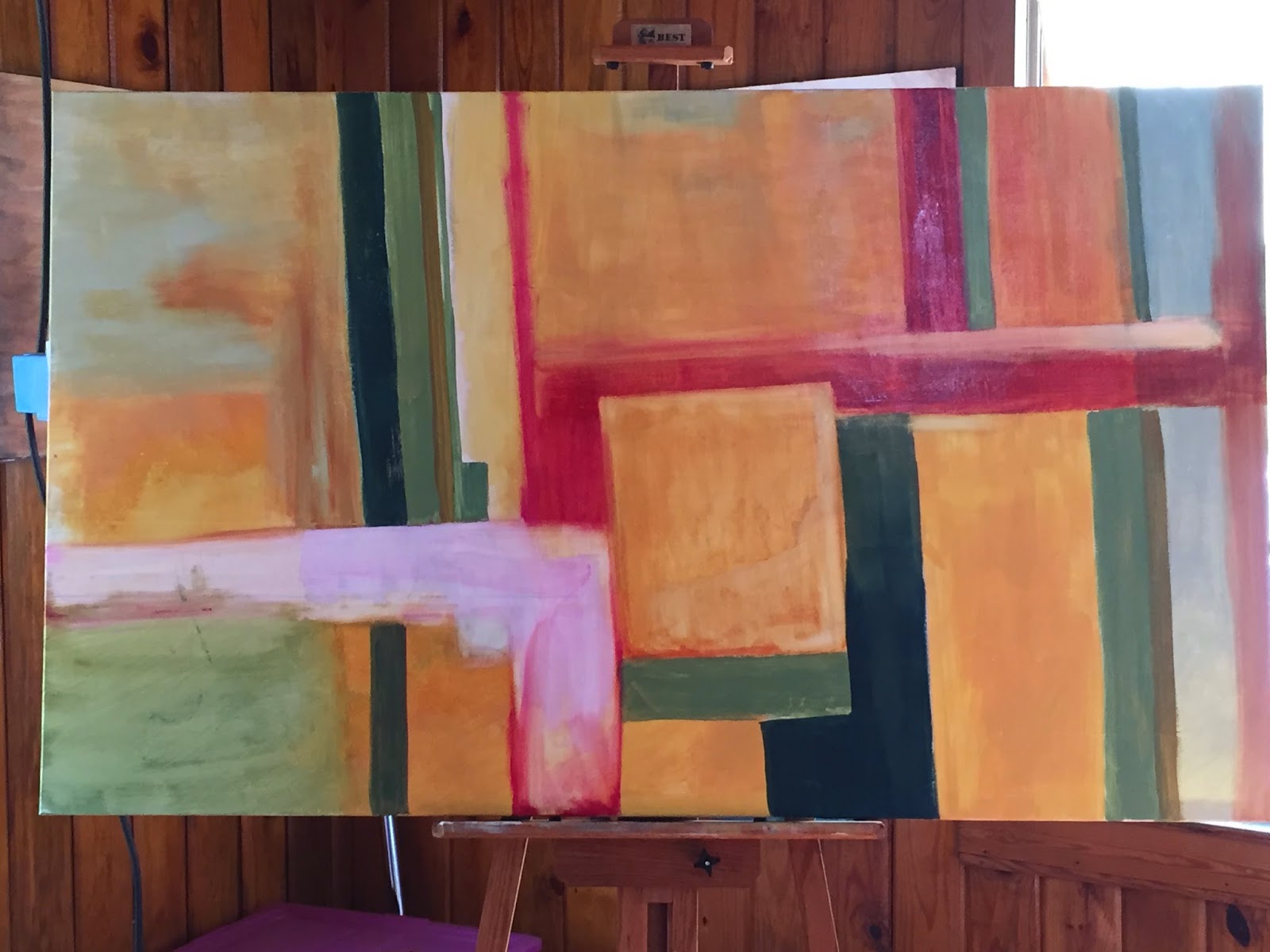 Now another problem reared its head. The easel that was just large enough for the "rose" is not large enough for this. The canvas slipped. I had to lift the canvas and hold it with my knee while I tightened the knob. Even then, it kept slipping here and there, each time threatening to fall. Trip to Chattanooga tomorrow for a sturdy easel and better large brushes (two and three inch ones).  By the way, turning this monster was a real bear!

The floor in the studio is uneven (as is everything at Tantivy) Couple this with my tendency to go high on the right and everything was aslant. I got out my T-square and chalked some marks. Tomorrow I will straighten these lines. Today I wiped off some of the most offending parts. I was getting tired. I called it a day. 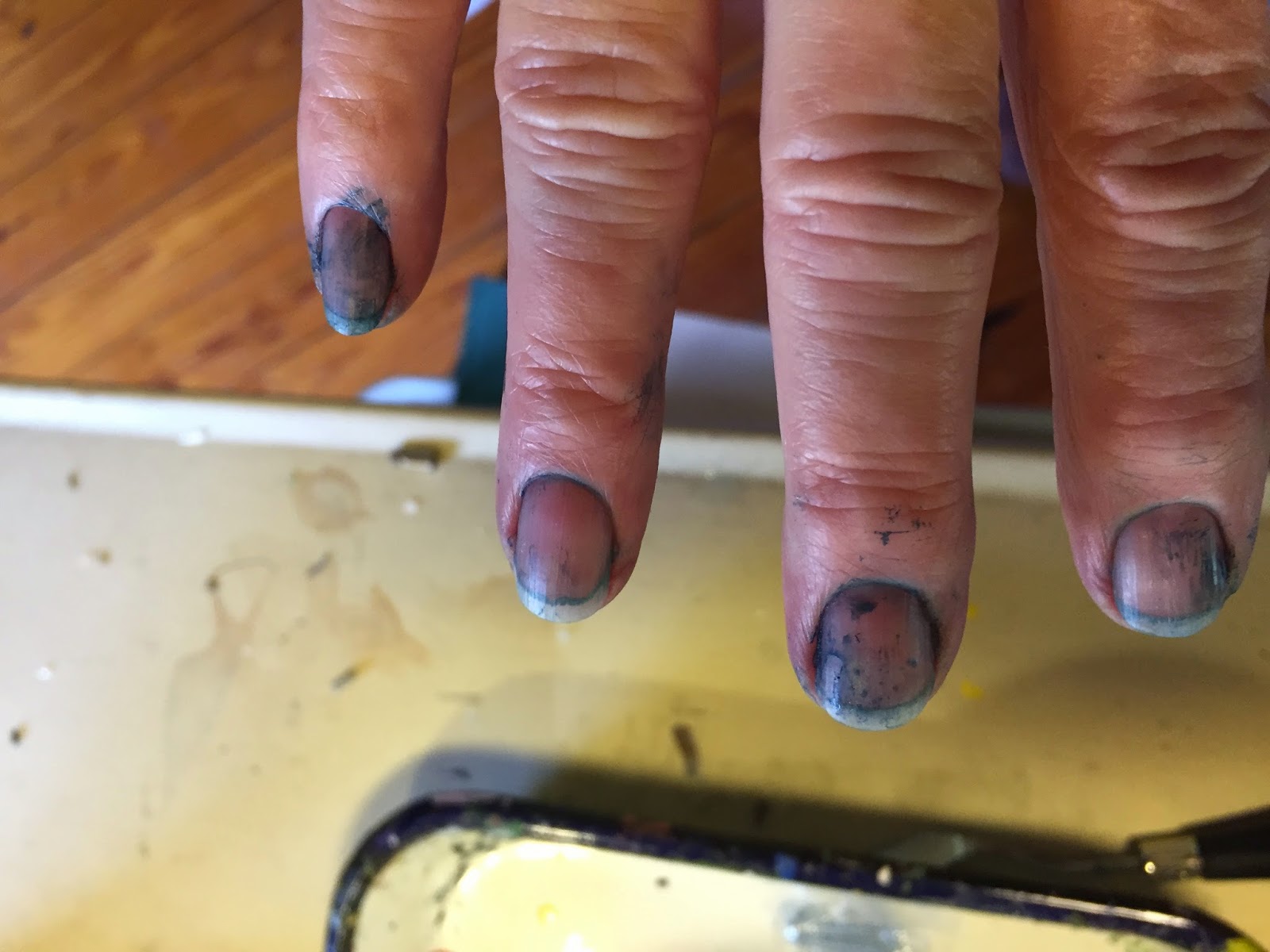 All this time I had been wiping off the things that just weren't right. I started with a package of 90 baby wipes and over half are gone. Fortunately, I buy them by the case and have another few packs on hand. I also have a wastebasket full of painted ones, blue fingernails and some really tired shoulders.

Maybe while I am in Chattanooga I can look for another canvas. I think that they have a 60 x 54.  I wonder if it will fit in my car.

Unknown said…
Forget the 2 and 3 inch brushes and go with a house brush or perhaps a large roller. That's a lot of canvas!