January 02, 2014
With so much going on I have had a hard time remembering which day it is!. Today (Thursday) feels Saturday-ish but yesterday felt Sunday-ish. I hope that by the end of the week I will be back on track.

After Christmas we went to see younger daughter and her husband and then on New Year's Eve, older daughter and her gang came here. My sister-in-law  who was put in the hospital for some unexplained bleeding, has been released in good health, her body having healed whatever it was that caused the bleeding (and they checked her from stem to stern. She even had to swallow a camera that was pill size.) So all is well.

Yesterday was beautiful and sunny but today is as grey as the old mare. There have been bright spots, though. Two bright red cardinals on my bare Redbud tree. I wish that I could have snapped a picture of that to share with you.  And there is this 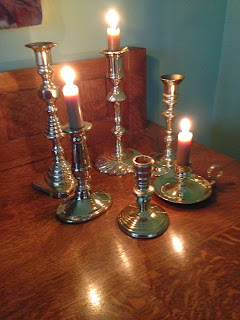 Mother used to say that you should burn a bayberry candle all the way down between Christmas and New Year. She didn't believe in luck, but they smell so nice that this old tradition for good luck was followed whenever bayberry candles could be found. My collection of mis-matched brass candlestick seemed right for the job and I had bought six candles when I was at Jenny's house last year. Three were in the living room and were burned down but the other three got blown out so I finished them today. I have saved the drippy bits (strangely enough found only by the candles that a six-year-old could reach) because they smell so good. I put them in the bottom of a very old butter dish whose top did not survive. 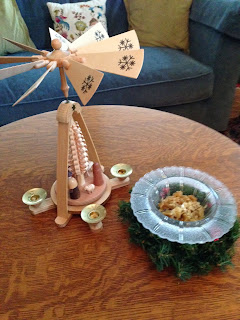 I hope that your Christmas, of which this is only the ninth day, is wonderful and that 2014 will be a very good year, filled with love and good things. I know that every day won't be bright and cheery but I hope that there is always light and that the bright moments come when needed.