November 29, 2013
Let me say that dinner was cooked in the new kitchen but not without a few consequences. The old disposer decided it had given us its all and quit, interrupting dish washing for quite a while. Dean did a temporary repair but that failed after a while and water leaked out all over the floor. But today the new machine was delivered and is being or is now installed. Wonderful. 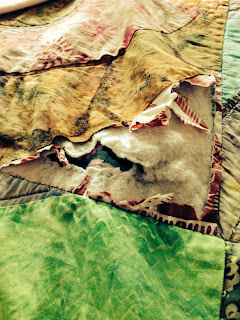 Do you think this quilt needs repair? It wasn't really sturdy enough for the dogs to jump up on it for years and has given way is several places. I have plans for a new one, but then again I have plans for many things. Can't decided whether to go ahead with new or do some patching on the patchwork. I am trending towards the latter in my thoughts. It would be handwork during the evening. 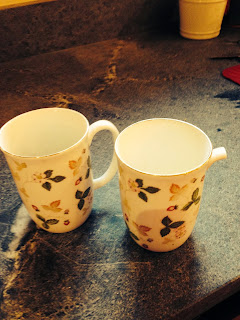 "One of these things is not like the other," they sang on Sesame Street. "Can you tell me which one is not like the other?". I once had four of these beakers. Long ago Dean took a cup filled with coffee to his workshop and set it down on a machine which vibrated as he used it and the beaker vibrated right off and onto the concrete floor. Bone china meets concrete - concrete wins. 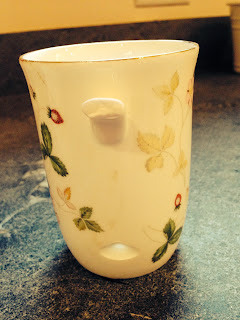 A few days ago I, in a frenzy of cleaning, set this one down on the coffee machine and then absent-mindedly tilted it. Bang! Bone did little  better with brand new bright red marmoleum than it had with concrete. I looked and thought that maybe I could use it for a little vase or something but ---do you see that little white spot in the triangular shape where the handle was once attached? That is a hole. A beaker with a hole so near the bottom loses much of it usefulness. One might even say ALL. 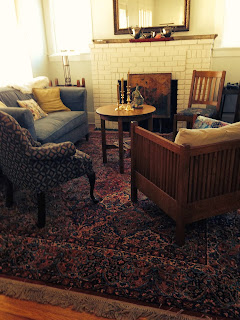 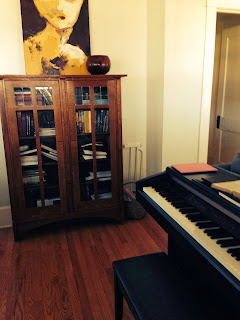 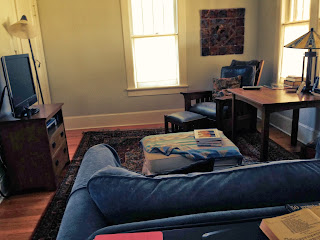 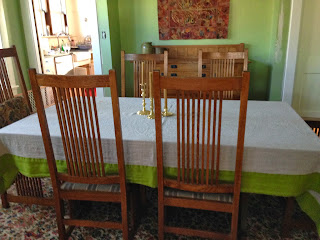 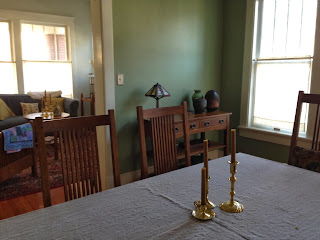 My niece Katie came over in the afternoon and she and Vicki did the decorating while I helped out in the kitchen. Dean was finishing the lighting fixtures while my brother, my nephew and I cooked. It was a busy kitchen but now large enough for all of us to work without stepping on each other. We had a lovely dinner with some minor flooding during the cleanup as I mentioned. By tomorrow things should be just great. There are still places in the house that need attention, but basically---we are back in business.

Unknown said…
In all fairness, I must give Katie all the credit for decorating. My only input was to say, "Katie, here are Caroline's things. Will you decorate?" She also pitched in with the vacuum cleaner and did some scrubbing.

Chrissy said…
What a lovely post, Caroline! Full of the best news (not the china beakers though) and images of your beautiful home and everything you've all worked so hard to achieve. Brilliant.
December 3, 2013 at 5:11 AM