I am so excited

April 14, 2013
Two exciting things in my life and one that is rather worrisome.

#1. There is no way to picture this, but Dean finally decided that he wouldn't try to do all the remaining work( and there is much still to do) by himself. Drew and Crew will be back on Monday. We are installing windows and then if Dean wants to make windows he can and we can replace the ones we buy. He also won't try to do the siding, roof, electric, insulation, flooring, etc. by himself. The hard part is that it is because he has realized that he is not as young as he once was and just isn't up to it. That is the worrisome element. According to Drew (our contractor) some of those jobs will be a handful for him and his young crew to do and there are four of them. Dean will supervise and Drew is fine with that. 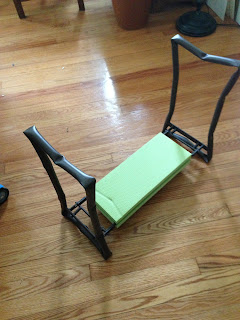 I have been looking for one of these kneeler/benches for about two years. I found one at Lowe's Friday.  Getting on my knees is not as easy as it once was and getting up is no piece of cake either. With these arms, I can do both and the whole thing can be flipped over to be used as a stool. I have lots of weeding to do. Lots. 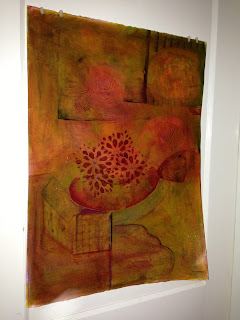 This was photographed at an angle (wonky? awkward? ) but is my latest effort. I have lost count of the number of layers of color glazed on the surface, but it is certainly nothing like the piece it was last Wednesday. This has been very educational from a technical standpoint and I think that I have taken another step toward where I want to be. I will be doing more work along this line to see what all I can do with it.

I won't show you the house; it would give you the heebie jeebies and you might call the health department. Yes, it really is just about that bad. On the other hand, Dean took a good look at the washing machine, put on his thinking cap, and figured out why it won't complete a cycle. It was as easy as replacing the filter at the end of the drain tube! Now I won't have t make six or seven trips up and down the steps per load and it won't take all day. Yea! Note: That only worked for a few loads. Now it won't work again! 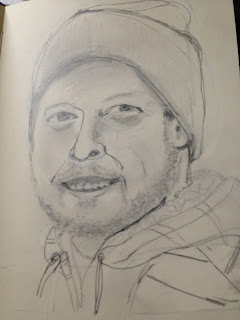 Still drawing faces. This is supposed to be Chris, one of the guys on Drew's crew. Between the stocking cap, which I had no idea would be so difficult for me, and the teeth-showing smile, which is always difficult, I can't say that it is a perfect likeness, but then again, the photograph is a perfect likeness so we don't need another. His teeth are actually very nice. (and his head is shaven)(Should that be shaved?)

I will be traveling some later this spring so I need to begin working on sketching scenery, etc. Today, however is very cool and a little damp so I will have to wait. I want to figure out just what I need to take with me that won't be a nuisance to carry around but that will give all that I need. I might be making a little sketchbook with the paper I like or might be buying one. Either way, I need to get with it. Pictures later, when there is something to photograph, not just an idea in my head. 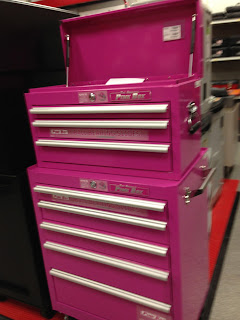 One last thing. I ordered one of these and one that is bright grass/lime green to go in my studio to hold art stuff and sewing notions. When we get the chance, the flat files will be painted either bright chrome yellow or bright aqua. I can't wait. After the house is finished and the fence forms a barrier around the back yard so the dogs can be contained, the studio hits the top of the list. Yea!

It's all good!!
XOXOXO
Caroline

Chrissy said…
I wonder what the crew members make of an arty lady who takes such interest in them. It must be a bit unusual - and fun.

I do like that pretty filing cabinet. So much nicer than plastic boxes.

We could do with a kneeler bench. Hugh and I have to help each other up sometimes. Makes gardening a chore, rather than a pleasure, when the knees creak!
April 18, 2013 at 11:38 AM