February 03, 2013
After a few flakes of snow, today has turned sunny with a clear blue sky. It is very cold, however. We went Friday night to see Jenny and celebrate her birthday. We arrived during a hilarious game of Uno and joined in the merriment. Sarie, whose  five-year-old hands couldn't hold fanned cards, had hers in a pile on the table so I joined in as card-holder. The game finally dissolved into hilarious attempts to end it so that we could have birthday cake and dinner for the adults. Family fun. 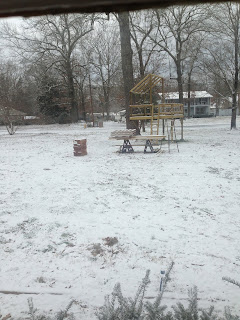 Saturday we woke to this . This is their front yard and the structure is Drew's tree house, still in progress but usable. 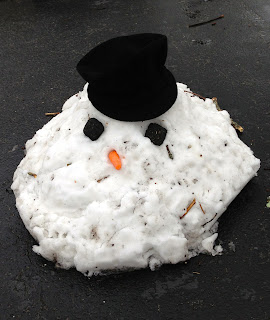 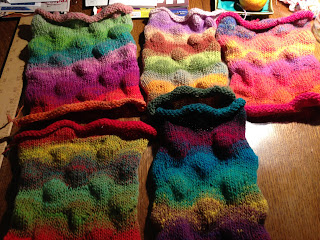 Most of the accumulation was gone when we left, but Jabba was still sitting there like a lump, minus hat which Jenny had removed to keep it dry.

On the way home the evergreen trees looked as if Mother Nature had filled a shaker with powdered sugar and shaken gently on their branches. The horizontal limbs of deciduous trees had a little blanket. It was charming. Once we had crossed the mountain there was very little snow and when we got home there was no snow, just messy roads and bitter (to me) cold.

I have finished five squares of the afghan and started the sixth but it seems that I either knit or paint and this week I need to do some painting. I have several 12"x12" canvases, a size that I have not previously used and they are my target for the week.

I have a few more items (haircut, meetings, etc) on the agenda, so I will have to plan my time efficiently (ha) to get all done before art teacher Sandy comes on Thursday. [ I know that I just got my hair cut but a style this short requires almost constant cutting. Then again, it dries in about three minutes!]


Socks. I never wear them in the other three seasons, but I am wearing them all the time now!!These were both gifts. The left was from my sister -in-law and the purple from Sara. I thank them both from the soles of my feet. 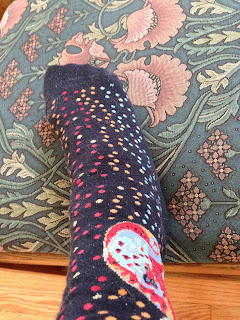 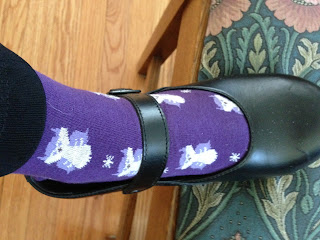 Thanks for reading. I would be happy for you to comment or email me. Meanwhile, stay warm.
It appeared that I had a reader in Australia who no longer shows up. Pray that all is well and she hasn't lost her home or worse in the terrible fires.