February 22, 2013
There's a hole in the roof and it is covered and the guys worked hard to waterproof it. They also tore down an old chimney from an old heating system - the coal fired furnace. Well, it is raining tonight, and we are being (not) lulled to sleep by the sound of a little waterfall - the one out of the light fixture in the kitchen. And over the sink. And in the office. It is not the night music we had hoped to hear. We think it is coming in from the old chimney area.

Dean went into the kitchen to get a cup and found water all over the floor and dripping steadily from the center fixture. We put the dog bowl under it and tried to wipe up as much as possible. Thinking that we might have to empty the bowl in the middle of the night, we left the room. 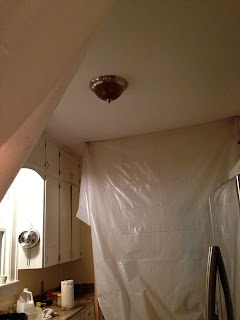 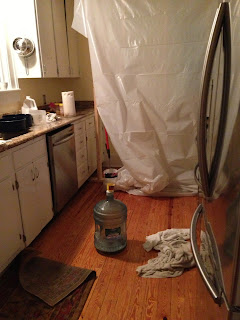 When we returned just a little later, the light fixture had filled with dirty water and was dripping steadily - actually it was more stream than drip. The water is orangey brown. The fixture over the sink is dripping into the sink and on the counter but is spread too widely to put anything under it to catch the drips. Most of the kitchen was slated to be changed anyway, but we weren't planning on doing everything right away.

We concocted this contraption. The water jug from the dog bowls, a small yellow funnel (the only one we could find in the house - there is a large one in the garage, but it is pouring and we have to go out the front door and around) and a cut off coke bottle funneling into the funnel.

Incidentally,that roll of paper towels you see on the counter is soaked through and through. The paper core has unglued. I will spread some of them out to dry for  use as paint rags. Wouldn't want to use them in the kitchen or to dry just-washed hands on.

After a while we realized that this funnel arrangement might not hold. 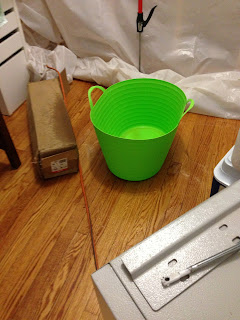 Finally we put this plastic basket in the office and another just like it in the kitchen. They won't be easy to move when full, but they have a big area to catch drips and they don't leak. We have turned off the lights in the kitchen. It is likely they will have to be repaired/replaced and we will be without light there for a few days.

We cut a hole in the roof of our Georgia house to install a fan and when it was half done the rain came down. I was up on the roof vacuuming up water and Dean was following me with the roofing sealer/tar. I used to say that some people might not think me to be a good housekeeper, but I had vacuumed my roof more recently than they!

All is well, but we have a mess to deal with in the morning.
Keep dry. Keep warm. Keep smiling.