October 28, 2012
We all know that summer colds are miserable. Well, I can now tell you from experience that autumn colds are not great fun either. One day I was fine and since then I have been miserable. Seven - ten days seems to be the time frame of the common cold and I am hoping for no more than seven.

Meanwhile, I have had plenty of time to read and have taken advantage of it, finishing Ken Follett's Winter of the World in just a few days. Follett's writing is not on the level of Helen Dunmore's ( see previous posts) but the history is there and very interesting. Families from Russia, Germany, Wales and America become involved and intermeshed as the war in Europe crushes lives in Britain and on the continent. There is much written about behind the scenes machinations as well as the heroic ways common people give themselves to benefit others. This book is the second in a trilogy about the 20th Century and a good look at the history we lived through as children. The book is long, but the reading is easy. 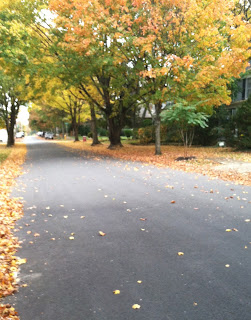 On the local front, our weather has suddenly turned cool as that wicked storm on the east meets the cold front from the west but yesterday I was able to get a few snapshots of things here. 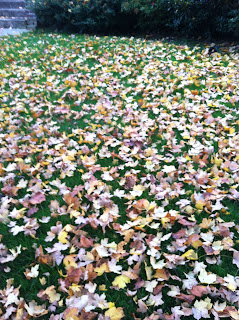 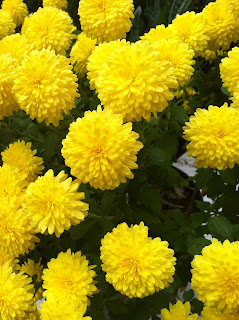 If you read Vicki's blog,( Here ) you saw her photo Tunnel of Beauty which is my street from the far end. Here it is in reverse. I love the leaves piled along the curb, but the city will come and vacuum them up soon.  Before then we need to do a little raking in our yard. 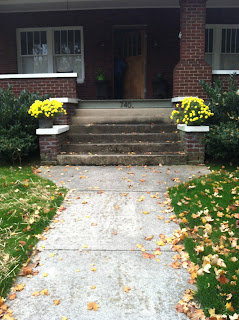 Here at the font door are Chrysanthemums from Sara's wedding last year at this time. They survived by benign neglect. This year I will try to do better hoping that I don't kill them. The bright yellow is such a cheery note on what has been a series of grey days. 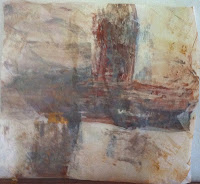 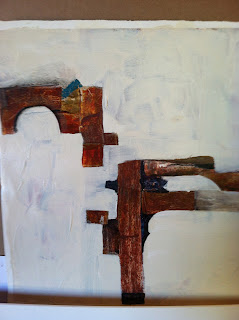 And now a little art. What began as this (left) has become this (right).
I painted over the parts that I didn't like and added just a touch of cobalt blue on the upper shape toward its right edge. I think I will add something to help the shapes relate to each other and probably a third shape, which has not been determined yet. Our class this time has been about how to go back into pieces that seem to be failures and give them a second chance. I think that this may be a good example of that. I know much more know than I did when I first painted it and feel much better about it. And isn't that a good life lesson to learn?

As I have said, Old Dog, New Tricks.  I have also found out that being 70 isn't all that much different than being 69 (except for the cold). Who knew??

Unknown said…
I hope your Autumn cold is soon a memory. Love the photos and I think the painting looks like the remnants of a wall that still has some plaster over the bricks. that's what I see.
October 29, 2012 at 4:13 PM