How did I get behind?

July 26, 2012
We went to Sara's house for a long weekend from last Friday until Tuesday. We had wonderful meals (check out the recipe for salad on Pinterest) and did some interesting things. We went to see the topiary garden of Pearl Fryar. Now I don't generally like topiary except for a few forms that are really formal. Mr. Fryar is a self-taught topiarist and his forms are neither formal, animals, or other objects. They are abstract art forms which are mixed in with his sculptures made from found objects. 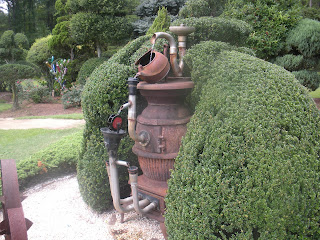 I love this pot bellied stove and tea kettle.

His bottle tree is aluminum. What nice colored bottles he has on it. 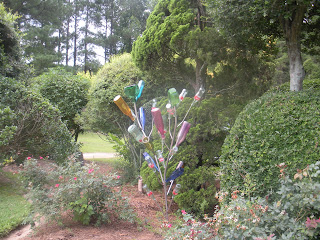 Another fountain but we couldn't decide what the parts were from. 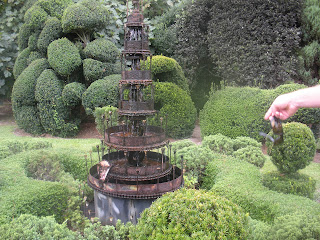 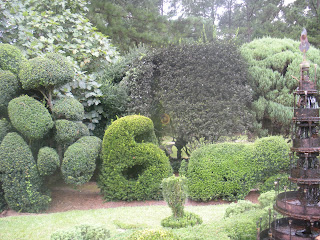 Mr. Fryar began his work with plants that the nurseries in the area were throwing out, and went from there. He now provides scholarships for C students who show promise. Coca Cola was so impressed that they installed a restroom on the property. His neighbors have also taken up topiary. 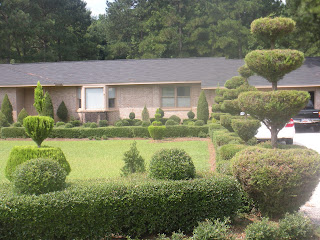 Next door and two doors down. We met the man next door and had a chat about how he saw what Pearl was doing and decided that he could do his own. Their styles are different, but both are nice. 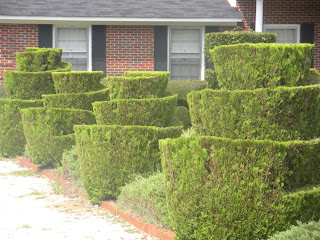 We left a nice donation to help Mr. Fryar continue his work. The entrance is free.

While we were in the area we also saw this partial wall and doorway. We have no idea what was there but there is a scrap of wall attached. Intriguing. 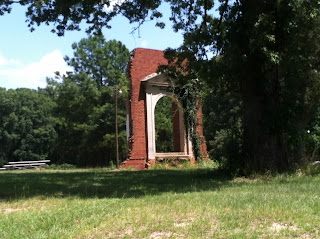 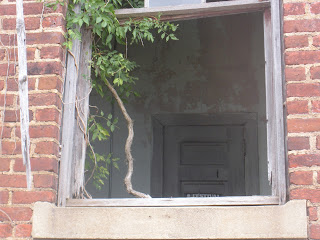 We also saw a falling down building that must have been the office of a cotton gin or something on that order. The back wall and roof are almost completely gone but as we peered in the remaining window I saw this door with a hook for someone's jacket. It made me wonder about what kind of office and who worked there and  when. It is the kind of history that is so attractive to me (and to many others). 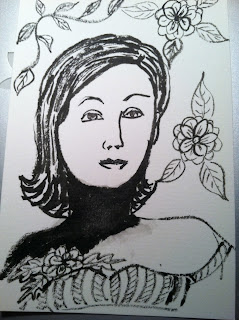 Finally, I found my Pentel Pocket Brush Pen which I had misplaced and had been looking for for several weeks.I want to learn to draw with it but, being a brush, it is difficult to make fine lines. Here is a little face that I drew with it. All the black on the neck shouldn't be there but a slip of the pen with waterproof ink means that the mistake stays! 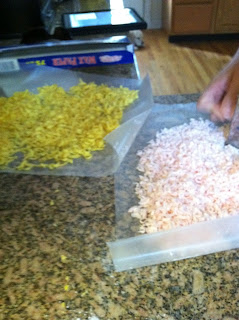 One very last thing. Sara and I made liquid body wash from hand soap and laundry detergent from a bar of laundry soap, Borax and Washing soda. Check out Pinterest if you are interested in trying any of these. Here are piles of grated bar soaps. It was fun to do together.

Tomorrow the office gets painted and I am working on several things to show you and have some new books to read that I will report on. I hope that your day is wonderful, too. If you get this via e-mail and want to comment, go to the bottom and click on Tantivy.blogspot.com and it will take you to another version with a comment box. (at least I think that it will).

Chrissy said…
I didn't get a reminder for this post - but I keep looking anyway!

Love topiary. There's a stately home in South England (GB) which has a long hedge. The topiary there represents a fox and lots of hounds bounding after it.
July 26, 2012 at 8:20 AM

Caroline said…
I just know that somehow I will get the kinks worked out of this thing. Sometimes I want to scream - but I don't. Too ladylike, I guess. Anyway, the fox and hounds sounds really interesting. My father-in-law had a chipmunk, squirrel and an inchworm. He was very proud to have created them. I think that the couple who bought the house later couldn't keep it up, though.
July 26, 2012 at 9:32 AM

Unknown said…
Caroline, I just clicked on comments right below your most recent post and was able to comment Easy Peasy! Why in all the years I lived in Columbia, didn't I ever take the time to visit Pearl Fryer's gardens? They were sometimes featured on the television and in the newspaper but I didn't realize he had so many non-living sculptures. Thanks for taking me there. I haven't had the nerve to try a brush pen even though I am certain there is one somewhere around the Bijou and Drew thinks highly of them.
July 26, 2012 at 10:16 AM