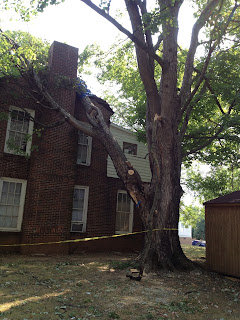 Last Thursday evening we had a sudden sustained wind of 50 - 70 MPH. Power lines and trees were downed. Three power poles were snapped. We had only twigs and leaves scattered around but a huge old sycamore split and part of it fell on the house about two blocks away. The large old house has been turned into apartments;I don't know if the owner lives in Cleveland or not. Dean surmised that a crane might be needed to remove the tree without further damage.  Part of the roof is pushed up and there appears to be a hole in it, covered by a blue tarp. I think that this tree was once three trees growing so close that they grew together. It could have been much worse, but it is still sad to see for bother house and tree. 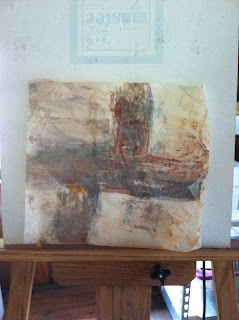 Here are some more small works on paper. They are about 9" x12" or so. Vicki says they look tortured and I have to agree. You never know what will come out when you begin to paint. I am still considering getting my nerve up and having a small "showing" for friends and neighbors.  Just to let them know that I actually do something out there in the studio. I might have the quilt ready to go by then also. I am continuing to sort out things that I have accumulated but won't use and getting the things I do use organized so that I know what I have and where it is. I do a little each day before I paint. 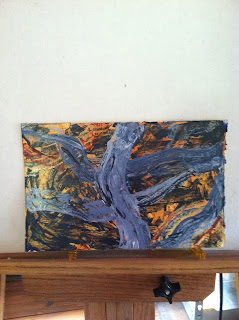 This is the first.(above). It was done on Deli paper (yep, like you would wrap a sandwich in) so it is wrinkled, but there is something I like about it. I will mount it on some water color paper and see how it does when it is not so wrinkled and is stable. you might get another photo.

This one(right) has a little of the writhing of some of Van Gogh's pieces, only by Caroline. It might be called July 5, 2012 in honor of all the wind. Or maybe A Fierce Wind. 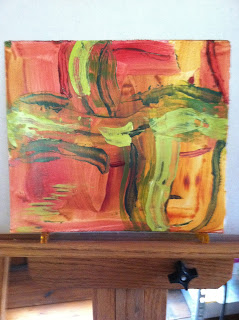 I want to do some more on this one, I think. some darker bits near the center maybe. I reserve the right to change my mind when I get out in the studio. That includes the right to paint out parts of it and start over. This was done with a palette knife as was the Wind one. New for me, but interesting. Using the palette knife gives you that crazy artist feel. Rather like throwing the recipe aside and tossing in a dab of this and a pinch of that when making soup. the result might be wonderful or maybe not. 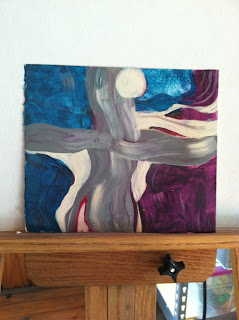 The one to the right might be my favorite. At least it is the most finished. The blue color did not photograph well; it is actually greener than that. This one was done with brushes. I really like the white passages and that circle that might be the moon.

We should have some cooler weather coming up. That sounds so good. Maybe I can get out and take some photographs of the town to show you.

Thanks for stopping by. I love hearing that you are reading. Love to all

Chrissy said…
Will I be successful this time with a comment, Caroline? Google don't always play ball.
I'm so pleased to see your studio is up and running and that you're creating great things in there.
Re last post: the hairstyle suits you! Wish it would do the same for me too - just a wash under th shower each morning - but it would never lie the way I want.
Thankful that your house came to no harm in the wind.
July 9, 2012 at 9:23 AM

Unknown said…
I was going to paint a girl's face last night a la Julie Fei Fan Balzer but
did some digital work instead. I like the redheaded girl the best but the
neck on the curly headed girl is really good.
July 13, 2012 at 3:25 PM